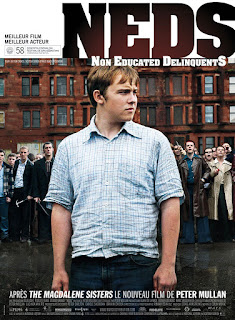 
This is a film that looks at a sub-culture that’s rooted in the 1970s and onwards, a sub-culture that reflects in some ways the experiences of the down-trodden youth of poor backgrounds the world over from a much broader spectrum of time.


The main character, John McGill, is a young lad who has an auntie who is a journalist in New York and a father who is an abusive, violent drunk.


John’s a bright lad with good prospects at school, or at least he would have if his older brother hadn’t already queered his pitch.  It takes a while for him to show his potential and he manages to stay on the rails for his first 3 years in secondary school.


There’s a certain inevitability about the beginning of his decline.  He’s rejected by a middle class family with whom he makes a link and from there gets mixed up with a bad crowd who act like a plughole to his swirling water.


Time’s spent hanging about doing no good.  A little fighting.  Some snogging.  Low level crime.  Vandalism… you can imagine the kind of thing.


The violence escalates and John’s delicately balances psyche is toppled after a series of events that push him over the edge and he’s forced to leave home and shack up in a boiler in one of the local tower-blocks.


There are many things to like about this film.


The setting is wonderfully done.  I loved the feel of the seventies and felt that this was about as close to my memory of the time as any modern attempt to recreate the period.  It may have used some obvious tricks to help create this illusion, but I reckon it’s only the obvious that would work to such good effect.


The violence is tremendously handled.  I wouldn’t usually comment on such things, but it really works.  There’s a matter-of-fact view of some of it (you’re involved in a big fight or watching one, it doesn’t have the frills that you often see on the movie screen, and it’s all hard blows and over in a blur more often than not).   There are a few rumbles between rival gangs.  There’s a humour to some of it that helps and there’s the down-right brutal cold feel of serious events.   Favourite of mine was a short scene where a young lad’s being tortured.  I don’t want to spoil it, but can’t help myself.  A rope has 2 bottles attached to each end and is swung around the victims neck.  The rope tightens and eventually the bottles clatter in to the victim’s head.  And they do it again.  It shouldn’t be funny, but for me it was a comedy moment.


There’s a great sense of place that is created by some fine filming and great acting.  There are some talented characters here and I think we’ll see more of them in the future.


John McGill reminded me of Ray Winstone in Scum.  Hard and deadpan and slightly deranged and with a very strong presence that makes his descent easily believable.


The plot itself works well.  It does it by the numbers at some points and that’s a shame, but mostly I enjoyed the steps from A to Z.


A couple of scenes stood out for me as ones I’d have cut out if I had any sway over it.  One in particular that follows a bout of glue sniffing just took things too far for me.


All in all, I’d recommend this with some confidence.  Lots to like and plenty of entertainment for your buck.


I’d suggest a double bill with That Sinking Feeling for a compare and contrast session afterwards.


Go and have fun.