Sleeps With The Fishes 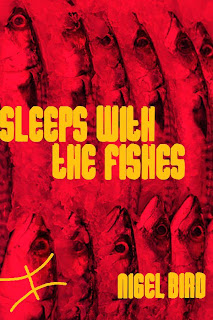 It's been a busy time of late and I've not been online as much as I'd like to have been.

The good news (for me at any rate) is that I've just completed a novella set in my home town.  Finishing a piece can be such a relief and I'm delighted to have made it to the top of this one.  As many of you will know, however, getting to the top is only a breather before tackling the descent into editing et al which is where the harder graft can be.

It's completely different from my general, except that it's similar in style to other pieces.  My intention was to write something for a young adult/adult audience who can stretch to mild sci-fi.  In the end, my own jury's out as to whether my effort's been worthwhile, but there's something in there I like, so fingers crossed.

Meanwhile, Mr Suit, that sharp little novella of mine, has been reviewed over at Crimesquad.  I'm very pleased to see their opinion shared - many thanks to GS.

'The prose is tight rope taut and the plotting first class...All in all ‘Mr Suit’ is a tense and thrilling novella which deserves a place on your bookshelf.'

I'm also here to let you know that I have a giveaway today.  It's called Sleeps With The Fishes and it's a short story in the region of 5k in the wordcount department.  For me it's a piece of dystopian fiction that reminds the reader to maintain a sense of the political world in order to avoid the overly sinister movements (however crazy they may seem) climbing to power. It's available in the US and the UK for free over the next few days.  After that it'll be back to the 75p/99c mark - which is about what it's worth in my opinion.

There's been one review so far by a Top 500 Amazon reviewer in the UK:


"This short story is both atmospheric and claustrophobic. It features a man who has spent 18 months hiding in a basement from the authorities because of an accident of birth. A new government has decreed that people with the wrong birthsigns are to be done away with. I love a story that makes me think, 'What if..?' If it were proved that more criminals had one birth sign than another, would that be a reason for condemning all people born at that time of year? Of course not, but could a cunning politician or two make people believe it?

Nigel Bird's writing is conversational in this short story, but perhaps because of that, it is very direct. The story portrays an uneasy future which made me shudder. We often think, 'That couldn't happen' but we've been wrong before. A very good read."

Another free book worth catching today is by Patrick Quinlan and it's called The Hit (US - UK).  Check it out.

Also to be flagged, there's a new paperback version of the All Due Respect anthology available now and you can pick it up at Amazon via the US or UK links here.  You buy it, you won't regret it for a moment, guaranteed.  I'm very proud to have been included in there.

My muddy paws stretched over to Brit Grit Alley last week to talk about Ripper Street.  It's a piece designed to gather discussion, so if you have an opinion it would great if you'd share it.

I have also been fortunate enough to have been sent an advance copy of Donnybrook by the sublime Frank Bill.  Can't wait to dig in to that one - it'll be available very soon, folks.  Keep those eyes open.

And welcome to the spring.  There are snowdrops in my garden.  Hi snowdrops.