One Man's Opinion: THE CHALK CIRCLE MAN by FRED VARGAS 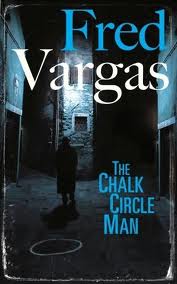 ‘The Chalk Circle Man' (US) is the first Fred Vargas book I’ve read and I knew I’d become a fan of her work within a few pages.


This is an extraordinary book that has a different feel and flavour to any of the crime-fiction I’ve read of late.


Jean-Baptiste Adamsberg has just been appointed as Commissaireof the police headquarters in Paris’ 5th arrondissement.  He’s a small town boy arriving in the city as if by accident, who has the ability to solve crimes by using his intuitions, senses and uncanny thought-processes and has a reputation based upon that.  For the logic and collection of evidence, he relies upon his team.   After solving a murder by working on gut-feeling, he wins over the wonderful Danglard and from then on they begin to build an unusual relationship based upon like and mutual respect.


When the chalk circles of the title begin to appear around seemingly random objects across Paris, Jean-Baptiste takes an interest.  He senses that the objects contained within the circles are going to become bigger and that there’s something sinister at hand.  Danglard is detailed the job of keeping in touch with the circles as they appear, which is good because he’s a morning person – afternoon’s tend to be slightly less efficient due to the consumption of wine.  There’s a wonderful humour to the way the killing is introduced and the case proper begins:


‘Two circles were discovered: In the rue l’Abbe-de-l’Epee was the cork from a wine bottle, and in the rue Pierre-et-Maire-Curie, in the 5th Arrondissement, lay a woman with her throat cut, staring up at the sky.’


The joy of this book lies in the characters living within it and in the ambience created.


It’s seductive.  Gently paced.  Stimulates all of the senses.


Jean-Baptiste is a wonderful creation.  He’s handsomely ugly with an inner beauty that influences all those around him.  He’s an optimistic fatalist who ‘always set out feeling hopeful and disappointment was invariable painful.’  And how’s this for a superb description of a man – ‘Adamsberg was open to every wind, like a cabin made of rough planks, letting his brain receive fresh air...you could imagine that everything that went in through his ears, eyes and nose – smoke, colours, paper rustling – caused a draught to whistle through his thoughts and stopped them solidifying.’


Danglard is also a gem.  He has 5 children to look after without help, bottles of wine to keep him sane, a love of information and logic and he talks his cases through with his kids when others might choose fairytales.


As if these two alone weren’t enough, there’s a great supporting cast:


Mathilde is a marine biologist who collects oddities, describes the world with reference to the sea, follows people like they’re objects of study and remains sexy in spite of her years.


Charles Reyer is the ‘beautiful blind man’ who Mathilde ‘collects’.  He’s bitter and awkward and likes to go up to seeing folk to ask if he can help them across the road.


Clemence Valmont is another of Mathilde’s oddities.  She’s old, but is constantly on the lookout for a husband through the lonely hearts.  Here’s one she decides not to reply to:


‘M. 66.  Well-preserved, large appetite, small pension, would like to meet F., not too ugly, small appetite, large pension, to keep each other company on the last stretch of the road.’


What I particularly like about this story is the way the solving of the crime felt almost incidental.  There are so many layers of interest that the attention is fully engaged without any feeling that there’s a need to rush.  It’s easy to get hooked to Jean-Baptiste’s pace and that makes the read such a pleasure.  I often envy the French for those long lunch-breaks when everything slows down and to me, this book has the feel of working slowly through a many –coursed meal where each plate is delicious and you just know whatever is coming next is guaranteed to be brilliant.


I’ve been a fan of Maigret for almost 30 years now.  I’m about to add Jean-Baptiste and Danglard right up there on the shelf next to him.