One Man's Opinion: BULLETS AND FIRE by JOE LANSDALE 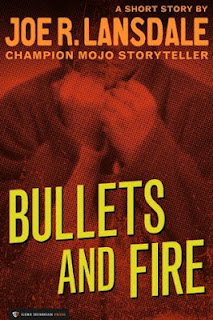 A couple of freebies for you:


Doug Lindsay has Lost In Juarez (US) for you and that should satisfy your needs.


If you’re still not satisfied, think about Joe Lansdale’s Bullets And Fire (you’ll have to pay for that one, mind).


Bullets And Fire (US)opens with the first person narrator relaxing in a bar after attacking a twelve year-old girl and breaking her nose.  He might not be that proud of it, but it’s what he had to do to prove his worth as he aims to achieve initiation into one of the local gangs.


Job done, he asks the men with him about their own initiation.  For me, the questions are a little bold for the narrator to be pushing at such an early stage and the lips of the gang members are a little too loose given their responsibilities.


Passing his test, the protagonist is taken along to the old bowling alley, not the gang’s hangout.  It’s a grim, primitive space, vividly described and bordering on the setting for a horror piece.  The setting shows Lansdale’s work off well.


From this point, the story unfolds with 3D smellivision and non-stop action.


It’s a good story, but not a great one.  There are many strengths to the piece as you might expect, but for me it lacks a little something – the dark edge of humour perhaps, a little more of a test for the main character or a little more deviation or some deviation from the path upon which things start.