One Man's Opinion: THE ADVENTURES OF CASH LARAMIE AND GIDEON MILES by EDWARD A GRAINGER 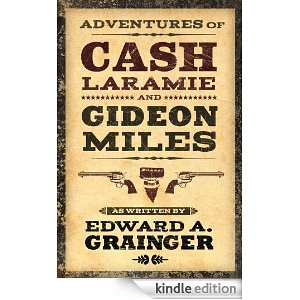 When you put up a title with ‘The Adventures Of’, I reckon you’re a brave author.  Boy had those tales better do the business if you’re starting off with that.


Edward A Grainger sure didn’t let me down with his work, unless leaving me needing to read more of them can be a crime laid at his door.


Cash Laramie and Gideon Miles work in a world that is familiar to me from old movies and legends.  In some ways, that gives the author and advantage as with the merest hint of description I’m able to fill in an entire 70mm frame.   That suggests it was easy; I’d say it’s the opposite.  It would have been so easy to overload the tales with the unnecessary and Grainger gets this perfect.


Their worlds are the extremes, the panoramic open spaces of the landscape and the claustrophobia of bars and hotel rooms where there’s barely enough room to draw a gun.


Their internal worlds are also of extremes. Extreme males with a dash of sensitivity.  Certainty in what they do versus a barrow-load of question marks.  The need to do what a man has to do and the need to leave all morality on the side for a while as they take care of business.


Throughout the book there are biblical names.  I’m not well-versed enough to try and attach meaning to Solomon and Delilah, Mary and Lazarus or Gideon, but I do think this world they all inhabit is a place where Old Testament and New Testament crash into each other like high-speed trains.  Cash Laramie is from the eye-for-an-eye  mould, yet at the same time he has compassion and a need to apply justice correctly.  Poor fellow.


Packing a series of stories together like this gives the book much more weight than a simple binding of short stories.  It’s like Block’s Hitman in that respect; instead of feeling like short pieces, I was left with a sense that I’d completed a novel as I’d spent so much time with the same characters.


There are all the ingredients you might imagine in Western tales and more.


The conversation is perfectly handled, lots said with hardly an opening of a mouth.  Take this for an epitaph:


“What kind of marker did you leave?”


Another thing that demonstrates the writer’s skill is his description of the shoot-outs.  He’s so matter-of-fact and brief.  Where they might have been used as a culmination of a story, Grainger just includes it like he might any other piece of the puzzle.

Added to that, there's the sense throughout that the balance between real life and legend has been found very precisely, the seeds sown to let the stories grow and grow into folklore.  I find myself already thinking of Cash Laramie and Gideon Miles as a real force in history - now how the hell did he manage to do that?


He’s also worked Cash into a multi-faceted character, even allowing him to show his hand as a detective now and then.


My advice to readers is that this is a real treat.  An absolute joy of a read.   A needs buying kind of book even at ten times the price you can get it for.


Go buy your ticket.
and in case you're not convinced by this, at Amazon.com there are 46 reviews and the book has a 5 star average.  WOW.