One Man's Opinion: THE LONG MIDNIGHT OF BARNEY THOMPSON 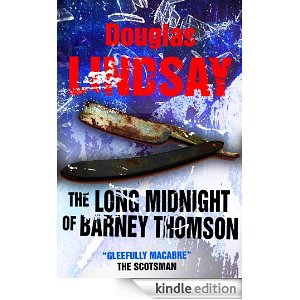 
Hair-cutting, like many other things in life, is related to confidence.  When we meet Barney Thompson, he’s all out of it.


Things have got so bad that men will pass up the chance of a haircut from Barney even if it means they need to stay in the shop for an extra hour in order to be seen to by one of his colleagues, Wullie and Chris.  It’s not just that Wullie and Chris can do a better job with the scissors, it’s that they have the patter – football, weather, politics, art – you name it and they have an opinion on the tips of their tongues.


Perhaps it’s not surprising then that Barney is a little peeved.  Might not even be too shocking if he decided to kill the others before he ends up doing his work at the back-room chair.


What’s more of a surprise is that Barney tells people of his murderous intentions.  And he keeps hinting at what he’s done after he’s accidentally stabbed Wullie in the chest with a tool of his trade and had to dispose of the body.


This book is refreshingly fun and highly enjoyable.  Trying to find parallels is something I struggled with given the limitations of my own reading experience.


The best I can do is to suggest this.  Imagine Jeeves and Wooster.  Turn Jeeves into a senile old woman called Cemolina who lives in a stinking tenement flat.  Take Bertie and take away his riches.  Have him born into a working-class family in Scotland and turn him into a charmless barber.  Now consider the mess these guys are going to get into.


Alongside the accidental killing, add to the ingredients a serial killer and the cops who’ve eaten too many pies and drop in the comedy of Monty Python, Benny Hill, Tommy Cooper and the like and you’re almost there.


When I read this book, I laughed out loud so much that I could feel my spirit soaring and my levels of happiness increase.  It’s hilarious.  The kind of humour I wish I could muster.


It would be a mistake, however, to underestimate the skill of the author simply because the book’s funny.  It’s only by setting you up, by getting the timing exactly right and by creating a plot that is utterly engaging from beginning to end that one can fully appreciate the talent.  Closest I can come to really helping you out is ‘Old Dogs’ by the wonderful Donna Moore; if you understand that reference, you’ll know exactly the high class of territory I’m talking about.  Not only that, but I needed to use the dictionary from time to time – slivicultural sent me scurrying, for example.


I’ve learned a few things in the process, too.


How to cover up for mistakes:


‘The first two haircuts were indeed dangerously close to being suitable cases for litigious action.  However, he was a past master of the water disguise treatment.’


And about hairstyles, the Byzantine triple weave being the most difficult in the world; that Marciano is not a type of pasta; that it’s OK to open a novel with the word breast; and where to go if I need a Heston ’86.


Douglas Lindsey, writes like he’s fully embedded in Scottish dialect, yet at the same time (and he’ll probably hate me for this) he has the beautiful English of an Oxbridge scholar (I know, not all beautiful language is English, BBC or Oxbridge, but still).   He’s written a whole series about Barney and I look forward to more fabulous reads in the near future.