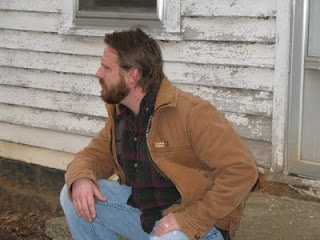 Frank Bill, King of the hill.


A: Depends on how much I’ve had to drink.


Q: You an alcoholic?


Q: Didn’t you meet your wife at an AA meeting?


A: No, it was a Teamster’s rally for recovering methamphetamine chewers.


A: She’d chew that shit straight from the Pyrex dish before the microwave finished off-gassing. Called her a teething-crank-headed-harlot-chewer.


A: It’s what the ephedrine tablets do after soaking them in distilled water, letting the junk float to the bottom. You cipher off the pure ephedrine. Then add one can of Liquid Heat to the bowl. Cook it in the microwave until the matrix becomes a paste. But she’d eat it.


Q:Isn’t your wife gonna kill you for saying that? 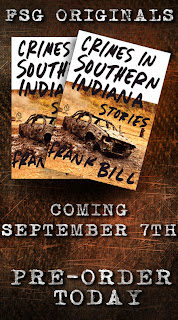 A: No, that’s how you tell a story. You gotta know how to lie and lie very well about what you you’ve seen, heard, read and done. Let the reader decide on what’s true and what isn’t.


Q: Is it true you were cooking crank while writing the stories for your debut book?


A: Well, I’m banned from buying Lithium batteries in bulk.


A: No, but I watched a guy shoot it up. He told me right before he broke the skin, “Boy don’t you ever try this at home.” And after seeing how many teeth he didn’t have, he didn’t need to worry. Besides, needles are not my thing. They’re for sewing. Guns are for shooting.


Q: You’ve ran in some rough circles. You ever did meth?


A: Back in high school I went on a seven day jag with my buddy who got meth in the mail from the west coast. We burned through a month’s supply in about a week or less. Then jones’d for more. Raided our parents and friends parent’s prescription medicine cabinets. Crushed and snorted pills until there was nothing left to snort.


A: One time a buddy and I went to buy weed from a lady and we found out her boyfriend was wanted for murdering someone. We joked afterwards, kept calling him a throat kiper.


A: A made up word, rather than cutting a throat, you kipe it.


A: Twenty years or so. We got stoned that night and watched Mike Tyson fight Buster Douglas. When Tyson hit the mat, my buddy and I thought something was wrong with the television. Couldn’t believe Tyson got knocked out.


Q: This was high school?


A: Yeah, I was around seventeen or eighteen years old.


Q: True you dated a stripper in high school?


A: Moved in with her. My mother was none too happy. I also pimped the high school cheerleaders and any female who wore high top tennis shoes.


Q: Are your stories real?


A: They come from real places. Things I heard growing up from family or things I done. Or in some cases it’s just things that interest me.


A: Backwoods Trannie vampire who comes from a broken home and falls for a zombie detective with a taste for sorghum. It’s based on actual events and research I did on the Terre Haute border with Aaron Morales. Lot of weird shit goes on up north.


Q: You telling another story?


Q: Your first book, Crimes in Southern Indiana is being published by Farrar, Straus & Giroux, when will it be hitting the shelves?


Q: Will you be doing a book tour?


Q: Are you going to Bouchercon?


Q: Will you be doing panels and signing books?


Q: Won’t your agent be pissed?


A: Only if it’s her turn to buy another round.