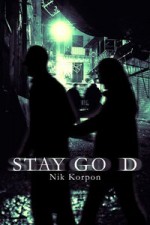 So, you’re from Baltimore.


Top to bottom, yes. It’s as nice as they show and as rough as they show. But I don’t live in the rough parts. I did see my old apartment in a few episodes. That was cool.


You get that question a lot?


You said StayGo_d was a love letter to Baltimore. Why’d you do that?


I tried to get out of Baltimore for a few years. When I finally did, I’d been living in Europe for less than a month and was massively homesick. My girlfriend (now wife) talked me out of spending two months of rent on a plane ticket to come visit. Instead, I wrote a book about my friends.


More or less. Christian is actually the one who gets me in trouble, most of the time.


Are their names the same?


Some I changed because they popped up in other stories. Some are the same. Some are pissed because I made them a junkie. A round or two will make it better.


Trying to be too clever.


What about Old Ghosts?


I was obsessed with Californication when I wrote that. It was homage, of sorts. And named after a line of old Vision skateboards I liked.


Why do you give away so much of your writing for free?


Because no one wants to buy it?


Maybe if people like the free stuff, they’ll actually drop a couple bills on my books.


That’s not a very safe bet, though.


If I wanted to get rich, I wouldn’t write books. I’ve been broke for a long time, so as long as I get to write stories for the couple people who want to read them, I’m set.


What does Garrison Keillor have to do with anything?


Sorry, though you said Guy Noir.


Black goes with everything.


It gets me chicks and makes me look dangerous. Well, maybe not.


But I’m married, so it doesn’t get me chicks either.


She likes Ben Tanzer’s books better than mine.


Anyone ever tell you you’re a son of a bitch?


Watching The Breakfast Club with the missus and the wee baby. I forgot how much I love this movie. John Hughes was touched by the hand of God.


I mean, what are you working on? What do you have coming out?


A lot of stuff I’m excited about, if I can be so narcissistic. A novella in August called By the Nails of the Warpriest. Some stories in Crime Factory, Black Heart Magazine, Shotgun Honey, Dirty Noir, Surreal South ’11, Speedloader, Warmed&Bound. Trying to sell one novel and writing another. More importantly, figuring out how to be a dad, which is by far the hardest and coolest thing I’ve ever done.


Read Daniel Woodrell, then go write.
Sea Minor would like to point out that, should you need further info on the book, there's a solid review over at Spinetingler for you to check out (solid and very positive).
Posted by Nigel Bird at 21:32