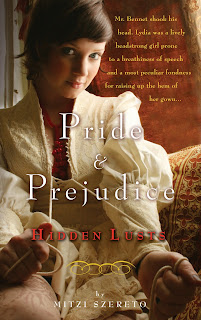 1. Why Jane Austen? And why Pride and Prejudice?

Why not Jane Austen and why not Pride and Prejudice? It’s one of the greatest social satires ever written. Austen created some wonderful and amusing characters; there’s just so much fodder on offer to take it even further. And take it further is precisely what I did with Pride and Prejudice: Hidden Lusts. I took great care to remain true to Austen’s voice and language, as it was important for me to maintain the illusion of her having conceivably written the book. Having said that, if people are expecting just another sexed-up rehash of P&P, they’ll be very surprised by my version. Oh, I won’t lie: there’s plenty of sex to be found, but what I’ve done is essentially take things over the top in a very unique and fun way as was done with the Zombies versions (only I didn’t include any zombies!). The twists of plot and scenarios I’ve created are as quirky and outrageous and rude and raunchy as anything you’re likely to find anywhere. Sprinkle in a dash of Carry-On and Benny Hill for added flavour and you get the picture. I guarantee you’ll have a rollicking good time!

2. Do you think Jane Austen would approve of what you’ve done with her novel?

I think she’d love it! She had a wicked sense of humour, not to mention a wicked sense of innuendo, which is obvious to anyone who’s even remotely familiar with Pride and Prejudice. You can’t tell me that the characters of Mrs. Bennet and Mr. Collins weren’t intended to be comedic, or that the character of Lydia Bennet wasn’t intended to be a representation of a budding sex siren. Austen might not have been explicit in representing the sexual hijinks of her characters, but the implication is there, nonetheless. I just ratcheted things up to the next level. I likewise answer a lot of unanswered questions, such as why Mr. Bennet spends so much time in his library, and why Lady Catherine de Bourgh was so insistent Mr. Collins find a wife as quickly as possible. The entire cast is present in Pride and Prejudice: Hidden Lusts – no one is sacrosanct, not even Hill, the Bennet family’s housekeeper. As for the handsome Mr. Darcy, not to worry; he’s present and accounted for in great measure. That’s why the catch phrase for the book is “The Classic That Goes All the Way!”

3. Do you have any other books scheduled to come out? 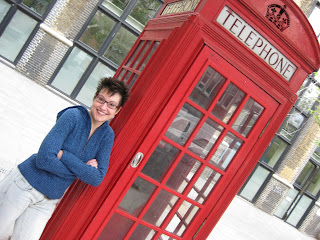 As it happens, yes. My new anthology Red Velvet and Absinthe will be out in autumn 2011, just in time for Halloween. It’s an original collection of paranormal erotic romance stories that draws on the rich Gothic literary tradition of such authors as Bram Stoker, the Brontë sisters, Edgar Allan Poe, and more contemporary names such as Anne Rice. It’s chock full of atmosphere and mood, not to mention plenty of steam and eroticism. It features a wide range of authors, all of whom are very fine wordsmiths. Hey, even I’m in there! In fact, my own story took its inspiration from Ian Somerhalder, who plays Damon in the television series The Vampire Diaries. I’m very excited about this title (and likewise about Ian, but that’s for another day). I’ve wanted to put this project together for quite some time. The market for the paranormal genre is quite hot, obviously, but that’s not what prompted me to do this book. I’ve always been a huge fan of the Gothic novel and paranormal themes (both in literature and film), and thought it was about time I took a hand to it myself. I expect the book to appeal to a wide audience of readers.
4. Do you feel being known as an “erotic writer” has helped or hindered your writing career?

5. You’re often quoted for saying that you believe the label “erotica” should be done away with. Can you explain more about this?

Well, taking into consideration what I’ve already said, in a nutshell, it creates a ghetto. I don’t think this serves writers who are serious about their craft. I realise it’s expedient to stick a label onto someone’s work, and I’m not sure we’ll ever be able to get away from this cookie-cutter method of shorthand that’s been forced on us by the publishing industry and booksellers. Sure, many authors are quite happy to have the label attached, but speaking for myself, when I get a comment from someone indicating that he or she assumes I write stories that merely function as a sex aid, I find that highly offensive, not to mention disparaging of my work. Fortunately, I don’t get these comments often – at least not by people who have actually bothered to check out what it is I do. Add to this the assumption that you aren’t capable of writing anything else, when in reality, speaking for myself again, I’ve already written in other areas, as have many other authors who have erotic works published. Need I mention Anne Rice? Her Sleeping Beauty novels are as explicit and hardcore as it gets, yet no one would dare say she’s some hack who can’t write anything but sex. To further demonstrate the hypocrisy of this labelling business, take Jilly Cooper, an author honoured by the Queen for her contribution to British literature. A lot of her work contains content that’s as rude as or even ruder than some of the stuff you’ll find in so-called erotic works. But by having that “erotica” label attached to those of us who work in the genre, well… you can bet your knickers we won’t be hearing from HRH any time soon.

6. So what’s this Mitzi TV thing about?
Mitzi TV is an online video channel I started up that focuses on the quirky side of London. I’m really big on quirky. I don’t even have to make any effort to do quirky – it just happens. It features me going on various adventures in and around the city – from a crazy pub sing-along and a teddy bear festival to prowling the streets in search of jellied eel and covering a vintage car show, where I got the chance to interview Tiff Needell and Jimmy Choo, of all people! I even got into some Morris dancing with a bunch of tech geeks, not to mention hanging out with a crew of Harley Davidson riders (one of whom gave me a ride). It was all good fun, and I hope the episodes reflect that. Nothing was scripted – I just went with the flow and let things happen. As a result, I’ve now been labelled as a comedian, which I guess is yet another label to add to my many labels.

7. What about your blog, Errant Ramblings: Mitzi Szereto’s Weblog? Is this a writer’s blog?
Well, I do sometimes blog about writing and publishing, but I blog about all kinds of things. In a way it’s like Mitzi TV – you just never know what’s going to happen! I don’t think Errant Ramblings fits into any traditional blog category, but then, I don’t fit into any traditional category either, so what would you expect? I’ve blogged about subjects ranging from social media, British public transport, life in London and missing vacuum cleaners, to my travel adventures, hanging out with my famous bear (Teddy Tedaloo), and teaching my erotic writing workshops. My blogs are quite lengthy as blog posts generally go, and really more a series of personal essays, which is the main reason why I don’t blog that often. As expected, the content is usually quirky and humourous. It’s read quite widely around the world, and seems to be popular in China at the moment. Perhaps I should blog about dim sum to keep the punters happy.

8. You’re an American living in Britain. Do you find British culture challenging or strange?


I am, indeed, an American living in Britain. Though it’s probably more accurate to say that I’m also a Brit living in Britain, since I have British nationality too. I’m wondering if I should conquer any other countries while I’m at it, or maybe just call it a day. As for British culture being challenging, not especially so. I’m an eccentric, and have been since childhood – and there’s enough eccentricity here to make me feel at home. To be honest, I sometimes find American culture more challenging!

9. What’s next for Mitzi Szereto?
Oh, I’m always up to something. Book-wise, I’m writing a very quirky crime novel that might even turn into a series, if things go well. I’m also working on a paranormal romance novel with another author, which is unusual for me, as I’m not one for collaborations. I never divulge the details of works in progress, as I’ve learned how cut-throat this business can be. Other than that, I continue to blog at Errant Ramblings and do the occasional appearances at literary festivals or what have you. Plus I’m always busy with my social networking, since I need to live up to this “Queen of Facebook” moniker that seems to have been stuck on me. There you go, another label! I’ll also be doing a bit travelling this year, quite possibly spending more time in America. The grass definitely doesn’t grow beneath my feet.

Other than asking everyone to buy my books, not really!