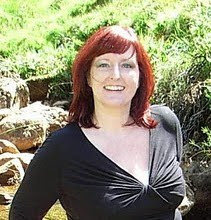 I was hoping to meet Donna Moore last night when I went along to see Tony Black's launch of his new release 'Truth Lies Bleeding'.

I was late and got a front row seat. This was good because I was able to get a great view of the event, but not so because I couldn't see who was behind me.

Soon as I turned round afterwards, I was disappointed not to see a huge ball of brightness (for that's how I imagine her to be).

Luckily, there were lots of other good folk there to compensate.

When I went to say hi to Tony, he pulled something from his pocket and told me it was from Donna.

You can imagine the anticipation.

It turned out to be a chocolate frog.

I thought about framing it. How it might look on my wall.

Instead, because I hadn't had any tea, I decided to eat the frog and frame the wrapper. How sweet it tasted.

Anyway, that's quite enough of me.

Left Brain: You're not going to make me look like a numpty are you?

Right Brain: I think you're quite capable of doing that yourself..
Besides, isn't it me who's supposed to be asking the questions?

and for the brilliant Old Dogs US: