Smoking In Fiction. Where Next? 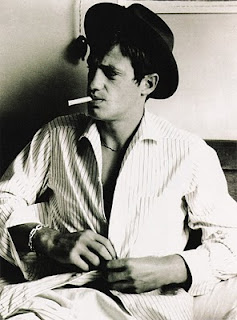 One day, I'll sit down and do a bit of research for an entry instead of leaping out of the bath like Archimedes and allowing myself to drip dry.

There I was, minding my own business and letting my mind drift around in the steam and the bubbles, when I caught a thought. It was of Bogart and Godard. More specifically, Bogart and Breathless (Un Bout De Souffle) and the way the cigarettes practically lived in their mouths. Belmondo's final act in dying is to take a final puff before the butt falls to the ground.

Made me consider writing.

I looked back at a screenplay (I call it that because that's what I thought I was writing at the time) and was amazed at how much my main man smoked. He could even light up in the staff office of the bookshop where he worked.

If I ever return to it, there'll be a whole lot of reworking needed and that's just to clear up the ash.

Cigarettes are an easy prop for a writer.

They give an immediate impression of a character as someone who is fragile in some way. There's a chink in the armour. Maybe they were brought up in the rough and tough, maybe life just caught up with them, but we know they need a crutch simply because of their addiction. It makes them seem extreme in some way, peripheral to the norm, outcast from the healthy and the comfortable.

They offer lots of action when we get stuck. Light a fag, feel for the packet, offer one across the table, keep the wind off the flame, the trails of smoke, the clouds and columns that we talk about. You can borrow a ciggy, be desperate for one, warm hands around them, go shopping at the store, light one straight after another. I guess there have been a few eaten or shoved in various places over the years, too. People open windows to blow out of, step into the rain because they're not allowed to spark up in the house. If they've given up, there's something easy for them to think about. They smell, they collect DNA and lipstick, they are/were ubiquitous (like the word ubiquitous has become).

There are the accessories. The zippo - it clicks, feels cold, starts fires, has a weight. The ashtray - for leaving butts in, for centring attention at the middle of a table, as a weapon, as a thing of beauty. The boots - for grinding the buts. The cancer. The gravel voice. The electronic talking device. The nicotine stains.

Crime writers (and of course, there are exceptions) use them more than their counterparts, I reckon. And I don't have any problems with that at all.

My question is, and I'm not sure I mentioned that I had one, what will happen if the smoking bans of the world really kick in?

What will replace the humble cigarette to cover all the above?

Drink and drugs can't do it in the same way. They involve changing states of mind and, when we're completely with a character, a changing state of mind is unsettling.

I don't know. It's a question.

Maybe it's down to the sci-fi gang to work it out, to show us how it will be.

If you think you've got an idea, post it up. It would help me find a less obvious way to keep my narrative plates spinning.
Posted by Nigel Bird at 22:46