THE DEADLIEST THIEF by JUNE TROP 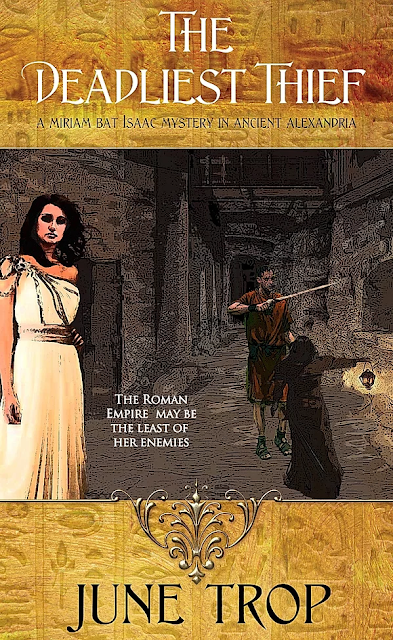 The Roman Empire may be the least of her enemies.

Miriam bat Isaac, an alchemist and amateur sleuth in first-century CE Alexandria, becomes frantic when her best friend, Phoebe, is kidnapped. At the same time, a brute of a man is stalking Nathaniel ben Ruben, Miriam’s occasional deputy, an itinerant potbellied dwarf. This brute of a man is none other than Pytheus, the last surviving jewel thief from the Temple of Artemis in Ephesus. His wife has agreed to tell you about him on condition that you promise to keep her story confidential:

It’s not safe to give you my name; just know me as the wife of Pytheus. My husband was one of the three men who, during the spring of the seventh year of the Reign of Nero, broke into the Temple of Artemis, made off with a king’s ransom in gems, and escaped on the Thalia to Alexandria.

I grew up in Roman-occupied Alexandria in a tenement near the waterfront of the Great Harbor, but my parents were from Tarsus. After my father was injured loading sacks of grain onto a ship bound for Rome, he brought my mother and me back to Tarsus so we could stay with his brother. There I lived until I married Pytheus, whereupon my husband and I moved to the commercial district of Ephesus so he would have a chance to get work in the warehouses lining the quays there.

But it’s the day of the Festival of Artemis that I want to tell you about, when the statue of the goddess is carried with great solemnity through the city. Tourists and Ephesians alike take their place either in the procession or along the way until it’s time to follow the priests to the Temple for the sacrifice.

Pytheus and I got separated in the crush as the priests were carrying the sacred statue through the city. Wrapped in the clamor of the festival and driven by the throng, I could not, despite my efforts, find him. Once I thought I saw him, but a moment later he disappeared in a plume of dust. So, I assumed I’d meet up with him at the Temple or, if not there, then at home.

But of course, I never did.

It didn’t take me long to realize he must have been involved in the jewel heist and fled on the ship that left so suddenly for Alexandria. Pytheus was by nature suspicious and secretive, and all he ever dreamed of was having easy money. Instead his life consisted of one intrigue after another and then running from the consequences. Sometimes he’d come home with unexplained cash, but that only honed his greed and fueled even more bitterness for the possessions others acquired. So, I knew what must have happened when he didn’t come home.

Fearing my landlord would sic the slavers on me to recover the unpaid rent, I took what little I had and booked passage straight away on the next ship to Alexandria. Setting out to find him, I asked for him first among the sailors, roustabouts, and deckhands and then at the various inns, cook-shops, and saloons. At first, he seemed happy to see me. He told me we were rich, that he’d come by a one-third share of the loot from the Temple of Artemis, which he’d fence when the time was right, and in the meantime, we’d live modestly.

Later, he told me about his accomplices in the heist: the captain of the Thalia and another scoundrel who was posing as a scholar of Greek culture to court the daughter of a rabbi. Little did I know my husband’s next scheme would be to seize their shares as well. I cannot explain his devilish plan here, but you will draw in a quick breath when The Deadliest Thief (US) takes you into the underbelly of first-century CE Roman-occupied Alexandria.

A KIRKUS REVIEW of THE DEADLIEST THIEF

“The multifaceted mystery is intriguing, with engaging characters… but the real strength of Trop’s atmospherically rich book lies in her ability to transport her audience to a distant time and place… Vibrant imagery and an entertaining plot ending with a most unexpected twist.” — Kirkus Reviews

The core characters’ lives advance with each book, but each story stands alone. So, begin with any one of the five in the series and accompany Miriam through the rancid underbelly of Alexandria, the city second only to Rome. You can purchase the books in e-book or paperback on the usual platforms, or at www.JuneTrop.com. And don’t forget to read my weekly blog on my website or Facebook page.