One Man's Opinion: HOW TO KILL FRIENDS AND IMPLICATE PEOPLE by JAY STRINGER 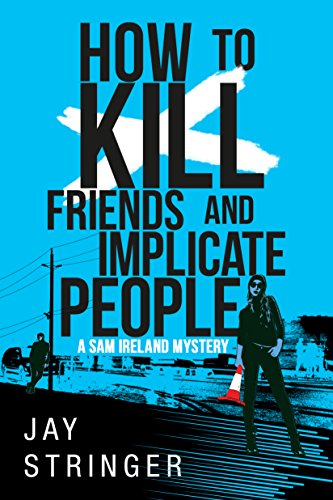 Fergus Fletcher is a hit man. For five thousand pounds, he’ll kill anyone you want. For seven, he’ll frame someone else. Pretending to kill someone is a first, but Alex Pennan has stolen from the mob and needs to fake his own death.

Fergus is looking for love. So is Sam Ireland, a private investigator and part-time bike messenger. But she’s got her hands on a very important package and is in a world of trouble with the mob. Joe Pepper, pillar of society and corrupt gangland fixer, will stop at nothing—nothing at all—to intercept the package and protect his reputation.

Can Alex stay dead while his widow dances on his grave? Can Joe save himself before his stomach ulcer explodes? Can Fergus and Sam make it to a second date before Joe hires him to kill her?

I don't often put in the blurb for a book, but in this case it felt right. There's so much in terms of plot development and intricate twist that I felt I might blow the whole thing by trying to offer an outline.

It's been a few years since I read the first of the Sam Ireland books, Ways To Die In Glasgow. It was such a great book that I have no idea why it took me so long to get around to the second. Perhaps it speaks more of my general lack of organisation skills and my the chaos of my reading patterns than anything else. Whatever the reason, I finally made it and I'm so very glad I did.

Though I didn't imagine it would be possible, I think that this book outdoes the previous one. It has the same levels of high drama, similar bursts of action and energy and the ever-present shots of humour, but getting the chance to hang around with Sam Ireland again means we know her just that little bit more. It's hard not to love her drive and determination and it's impossible not to want the best for her. When she meets Fergus, a hitman who is losing any sense of job satisfaction, we know they go together like Hepburn and Tracy while understanding that there's a fair chance their growing feelings will be the end of both of them. Throw in a bunch of criminals who are as interesting a bunch of lawbreakers as you're likely to find and put it against the backdrop of a city that has a heart that beats constantly throughout and you have something very special to entertain you.

The chemistry between the hitman (who has to rank up there with any other) and the private investigator (also right up there) is so strong that it begs a revisit at some point in the future. They're a great combination and another appearance would be impossible to resist. The only issue might be keeping it real. In How To Kill Friends (US), even though each strand is extreme and unusual, it always comes across as entirely plausible and down to earth. It feels as if this kind of thing could be happening in a city nearby right now. I guess that's a mark of a master story teller.

Jay makes no secret of the fact that he's dyslexic and I admire him for the way he talks with passion about it. Supporting pupils dyslexia is part of what I do. The identification often makes a child feel better about themselves when they come to understand why aspects of learning are so difficult. It always helps when we point to dyslexics who have achieved success in their fields and done wonderful things in the past. From now on, I'm going to add Jay Stringer to that list. I'll tell them that one of the finest crime writers in the UK is Scottish and that when they get older they might enjoy the books, on audio if necessary. I think they'd get a kick out of that.

I'm not sure what the usual price is, but I think it's on offer just now at around the £1/$1 mark, so what are you waiting for?