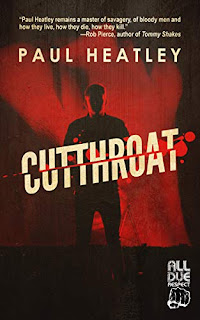 John lives in a small house that has nothing in it, bar the absolute essentials and his boss's wife, Mary. She likes to get under the covers with her lover, a Geordie who has appeared on the scene from nowhere like some mythical beast, whenever she can. He's big and hard and scared of nobody.

There’s a job on soon and the tensions are mounting. Mary’s husband gathers his crew and warns them to keep a low profile. John isn’t one who finds that easy to do. He goes out with his mate and ends up in a bar brawl that gets terribly out of hand (no pun intended). A quick visit to the local underworld doctor and things are back to normal. Well, almost normal. The driver for the heist is now incapacitated and Jock is brought into the team by Mary’s father who oversees everything.  Jock and John are cut from the same kilt and their testosterone and pride ensure that there’s an edge between them that could only be settled in a fight to work out who is the top dog.

The ripples caused by the tensions within the group soon turn into waves when not everyone is happy with the outcome of the job. To complicate things further, we soon realise that the main motivation for the whole thing has been something else entirely. Revenge becomes the new thrust of the story and we know that there’s going to be nowhere to hide. For some of those involved, the world is about to come crashing down with fists of thunder and not all of them are going to be able to survive the pounding.

I really enjoyed this read. The prose is stripped bare just like John’s flat. The characters feel very genuine and their motivations are rooted in their histories as much as in their circumstances. There’s an edge of menace throughout and when action is called for, it’s as strong and powerful as those involved. The Newcastle setting really works and there’s a terrific seventies feel which is all the more authentic because the detail is kept to a minimum. I also liked the way the dialect comes through in the conversation – it might take a while for some to get used to, but the meaning is always clear.

My only reservation comes in relation to the structure. We begin in 1978, shift back to a couple of years earlier and then back to 1978 to where the opening left off. The first difficulty I had with this is one relating to my memory (mine isn’t great) and I found myself rushing back to the start to remind myself when it was set (sure, it was clear, but I don’t think I registered it at the time and just placed it in the seventies). The second is that it was so well put together that a lot of the middle section adds a layer of back-story that I don’t feel was entirely necessary. I’d like to read it again and simply go with the opening and final parts to see if that would work alone – I reckon it would stand up nicely and.

The ending here is as satisfying as it was unexpected. Its a perfect fit and somewhere lurking amidst the surprise and the elements of disappointment was a pleasing burst of triumph.

Cutthroat(US)is top quality noir fiction of the Brit Grit variety. Sparse, dark, tense and action-packed, there are no heroes, no frills and no dull moments. Another belter from All Due Respect - put it to the top of your list.