One Man's Opinion: LADY, LADY, I DID IT by ED McBAIN 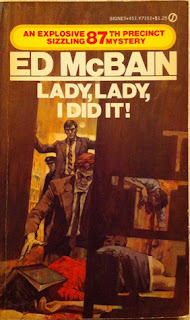 This one opens with some horseplay at the station. The detectives are pulling Kling’s leg about receiving a call at the station from his fiancée. Though it’s no crime to be in love, they make him feel as though it might be. Regardless, he manages to arrange their date for later on and he’s particularly excited because of the revelation about her new bra, teasingly named Abundance.

‘Abundance’ is the final word he hears her say, for the next time he gets to see Claire, she’ll be the victim of a shooting in a local bookstore. Steve Carella and Kling take the call. There are three dead and two wounded. Kling walks into the back of the shop to see a lady sprawled before him. It slowly dawns on him that she’s the lady he was having a conversation with in the squad room, the lady who just happened to be the love of his life.

It’s a hugely charged and emotional moment for the reader. There’s been an uneasy sense that something is about to go wrong from the off. For those of us who’ve been reading in order, there’s the double whammy of a shared history. When we met Kling, we also met Claire. It wasn’t an easy start for them as a couple, but I was willing them along back then. As Kling falls apart, he takes us back to those early days and reminds us of their beginnings. The lump in my throat was big as an ostrich egg.

To balance the sadness, there’s the beauty of the 87th. The whole squad come together. The file in the office is labelled the Kling case. Patrolmen and detectives alike rally round, keeping ears open and focussing on the bookshop murders while everything else takes a back seat. It’s moving to observe and, because these are old friends rather than just fictional characters, it’s wonderful to behold.

Carella and Meyer lead this one, but Kling insists on doing the work. He pulled the call, after all, and has every right to do so. Problem is, the way the investigation is carried out there’s an assumption that the killer was after one of the victims. In order to pursue the case, each of them needs to be investigated in turn and it might be that any guilty secrets in Claire's life will be exposed in the process.

The layers are peeled away with great craft. Each becomes a story in its own right, though not all of them add anything to the investigation.

I loved it for many different reasons. It felt personal. The cops deserve a break. Whatever Claire has been hiding, we know she did it for the best of reasons. Each set piece is a treat (take Claire's father's reaction as a prime example). By the time we come to the end of the story, the killer has almost been forgotten, but when the threads are taken up for one last push, the knots re tied perfectly.

A top-notch crime story that I reckon will have any fan of fiction hooked.

This one was published in 1961. Some of the language and terminology reflects that and I find it easy to get along with it because of the sentiments at its core. I was struck in this one by a passage about Detective Brown.  Remember that it was almost sixty years ago and then consider what’s changed.

“He turned on the radio very softly and listened to the news broadcast as he shaved. Race riots in the Congo. Sit-in demonstrations in the South. Apartheid in South Africa.

He wondered why he was black.

He often wondered this. He wondered it idly, and with no real conviction that he was black. That was the strange part of it. When Arthur Brown looked in the mirror, he saw only himself. Now he knew he was a Negro, yes. But he was also a Democrat, and a detective, and a husband, and a father and he read The New York Times – he was a lot of things, and so he wondered why he was black. He wondered why, being this variety of things besides being black, people would look at him and see Arthur Brown, Negro – and not Arthur Brown, detective, or Arthur Brown, husband, or any of the other Arthur Browns who had nothing to do with the fact that he was black. This was not a simple concept, and Brown did not equate it in simple Shakespearean-Shylock terms, which the world had long outgrown.

When Brown looked into the mirror, he saw a person.

It was the world who had decided that this man was a black man.

Being this person was an extremely difficult thing, because it meant living a life the world had decided upon, and not the life he – Arthur Brown – would particularly have chosen. He, Arthur Brown, did not see a black man or a white man or a yellow man or a chartreuse man when he looked into the mirror.

But superimposed upon this image of himself was the external concept of black man-white man, a concept which existed and which Brown was forced to accept. He became a person playing a complicated role. He looked at himself and saw Arthur Brown, Man. That’s all he wanted to be. He had no desire to be white. In fact, he rather liked the warm, burnished colour of his own skin. He had no desire to go to bed with a creamy-skinned blonde. He had heard coloured friends of his state that white men had bigger sex organs than Negroes, but he didn’t believe it, and he felt no envy. He had encountered prejudice in a hundred and one subtle and unsubtle ways from the moment he was old enough to understand what was being said and done around him, but the intolerance never left him feeling angry, it only confused him.

You see, he thought, I am me, Arthur Brown. Now what is all this white man-black man crap? I don’t understand what you want me to be. You are saying I’m a Negro, you are telling me this is so, but I don’t know what Negro means. I don’t know that this whole discussion is all about. What do you want from me exactly? If I say, why yes, that’s right, I’m a Negro, well then what? What the hell is it you want? That’s what I’d like to know. Arthur Brown finished shaving, rinsed his face, and looked into the mirror.

As usual, he saw himself.”

Sixty years ago. My word.

Mr McBain, you certainly did.

And if you need another opinion, why not check out Hark the 87th Precinct Podcast here?
Posted by Nigel Bird at 22:49