One Man's Opinion: SEE THEM DIE by ED McBAIN 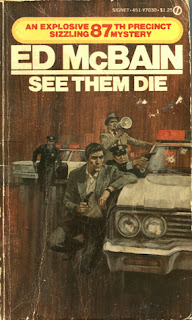 The sailor swung around on his stool. He leaned his elbows on the counter top and drunkenly looked out over the sun-washed street.
"It looks nice and peaceful to me," he murmured.
"Can you see through the walls, sailor?" Louis asked. "Do you know what goes on under the skin of the buildings?"

Before thinking about See Them Die, I'm going to point you in the direction of a long interview I did with Damien Seaman that was put out last week in two instalments. The first is here, the second here. It's a thorough interrogation into writing, editing, publishing, publicising, living and breathing. Among many other things, I get to chat about my forthcoming Down&Out books release Let It Snow which is inspired, in the main, by the 87th Precinct novels of Ed McBain, not that I'm claiming that it's a patch on the master's work. How on earth could I begin to hope to get close to books like the one I've just finished?

After recently reading and thoroughly enjoying The Heckler, I was prepared for See Them Die to be less satisfying, after all when the bar is raised so high not every book can make it over. I couldn't have been more wrong. I'd go as far as to say that this could by my favourite 87th novel so far.

This was a really special read. The opening chapter sets the scene, beginning the dissection of the Puerto Rican community on the station's doorstep. It has the feel of Steinbeck, carrying weight and simplicity in equal measure. The broad strokes soon become more detailed as the focus shifts from the street to the luncheonette run by Luis Amandez. The only customer is Zip, a teenager too proud and arrogant to join the biggest gang in town who has formed his own. He's the leader of the Latin Purples, a gang with only four members that needs to do something major if it's going to gain any reputation.

The pair are soon joined by a drunken sailor who's looking for the local whorehouse and is struggling to come to terms with the fact that it's closed on a Sunday morning. The interplay between the trio is beautiful, the dialogue and action slick and easy and we know everything we need to about them within a few paragraphs.

By page three, we know that there are going to be two people lying dead on the street before today, but have no idea who they might be.

The Latin Purples intend to murder a local boy because he made advances towards Zip's girl, China. As it turns out, the advances were merely a hello and China wants nothing to do with Zip, but the boy has to go anyway. The Purples need to splash their colour around and murder will certainly add to their notoriety.

Enter the police. There's friction at headquarters between three of the officers. Puerto Rican local boy made good, Frankie Hernandez, hard nut and cold-hearted Peter Byrnes and main man Steve Carella. There's needle between Byrnes and Hernandez born from the former's racism and general unpleasantness and there's friction between Carella and Byrnes because of a previous encounter where Byrnes over-stepped the mark on the wrong day. Byrnes is on pins because he's keen to nail local anti-hero Pepe Miranda, public enemy number one. Byrne's desperate to finish Miranda off personally and is prepared to take his frustration out on anyone who even looks at him sideways.

Byrnes ends up drinking coffee with the sailor, Zip and Louis. It's all friendly on the surface, but charged by the heat and the growing tension of the city as it springs to life.

As the local people wake, the area blossoms like a desert after a rainstorm, stirring the pot and bringing all the main players onto the stage.

The sailor meets China and the pair fall hard for each other as if fate has brought them together so that they can escape their own private hells. Pepe Miranda is discovered in one of the street's buildings and the entire area is swamped by police and spectators while the church bells ring. Hernandez goes to speak to the boy Zip intends to wash. Two members of the Royal Guardians stray into the territory. The loyalties of the Purples become strained as they hide their guns and prepare for action. Tension within the detective builds. A couple of hookers see their opportunity to make some extra cash. A picnic basket is prepared. And people die.

I adored it. The layers of the characters are exposed carefully as contrasts are explored. We see the differences between the law-abiding and the crooks, the gap between generations, the tensions between an immigrant community and the police, the rivalry of gangs, the precarious interplay of lust and love, bravery and cowardice, hope and hopelessness, life and death.

As the god overseeing the action McBain plays with us a little. He even tells us that he's doing it. If he were so inclined, he could make all the endings rosy. But he didn't feel like it.

There may be melodramatic elements to the story, but I'm a sucker for a good set-up that keeps me on the edge of my seat ready to reach for the hankies.

I reckon See Them Die is like a collision between Angels With Dirty Faces and West Side Story. It's tough stuff with a big heart. And if you listen really carefully, you may even feel the beat of the musical score.

ps For loads of other information on the book and a hatful of opinions, check out the Hark podcast here.