One Man's Opinion: KNOW ME FROM SMOKE by MATT PHILLIPS 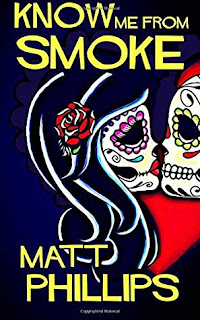 The thing Royal couldn't understand: How was it that when a good thing happened it came along with a bad thing?

Royal Atkins is a dangerous man. He's killed innocent victims in society and unpleasant guards inside the walls of his prison. Being dangerous doesn't make him cold or evil, however. When he gets a lucky break and is allowed to go free on a technicality, he decides to put his past behind him and to walk a straight and narrow path, even if this does mean having to stoop to manual labour to survive.

Of course, going straight isn't as easy as all that. He steps into trouble as soon as he meets the two hardened criminals Phoenix and Markie who live in his new halfway house. These two jibe and mess with Royal's head, though he manages to keep things even for a good while.

Which is when Royal meets Stella.

As soon as their eyes meet, there's a connection. Sparks of lust and love fill the space between them and there's a sense that fate has brought them together. There are other connections, too. Royal immediately recognises her as the wife of a man he killed twenty years earlier. He even gets to see the scar on her hip where one of the bullets from his gun entered her body.

Stella hasn't been with a man since her lover was murdered, but there's something about Royal she finds inristable and it's not long before temptation wins out and changes their lives forever.

If the story ended there, there may have been happiness and joy all round, but it's Matt Phillips who's pulling the strings and he's never going to let his characters get off that lightly.

Their world becomes complicated. Phoenix pressures Royal into finding easy ways to get cash. Two local detectives decide to get on Royal's back. Royal's past crimes haunt him in a very real way and he's torn between doing the right thing and the only thing he can.

Know Me From Smoke (US) is put together as nicely as Stella herself. There's plenty of depth to all the characters and storylines. The pressure exerted on Royal is applied relentlessly in such a way that it's difficult not to feel sorry for the guy. The musical background of the seedy bars and restaurants works a treat. The cops tread the line between cool and corrupt with sure and easy steps. The final chapters, even with the sense of knowing what has to come, have the power to quicken the pulse and still the lungs.

I'm going to put this down as a bitter-sweet-bitter-sweet-bitter noir. Imagine a cocktail that tickles all of the taste buds at once and then go over to the bar to place your order.
Posted by Nigel Bird at 22:48