A THANKSGIVING MIRACLE by LES EDGERTON 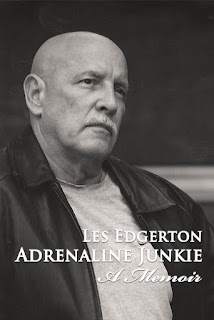 I’m not much for organized religion. I don’t believe in karma and all that. I believe there is a God, but not the God that is proclaimed from most pulpits. The God I believe in is a hands-off kind of being who only steps in when all is truly lost for mankind and not for individuals. He doesn’t help anyone win football games and He doesn’t save people from famines, pestilence and war. He gives people a guide and if they choose not to follow that guide, well, there are consequences clearly delineated. From what I know, God is interested in the individual’s soul and not their earthly bodies.

All that said, I just witnessed a Thanksgiving miracle.

I received an email from a woman who said she had discovered she was my daughter from a DNA test she’d submitted to Ancestry.com.

It was a communication I’d expected for fifty some years

I wrote about it in the memoir that was just published on the nineteenth of this month, Adrenaline Junkie (US).

A book it turns out she had read just after discovering I was her birth father.

Here’s the first message she sent me:

Hi, I recently did my ancestry DNA and apparently we are closely related. I was adopted at birth. I have no biological family information, including medical history. I don't know if you have or are willing to give me any information on who I am, but if you are I would appreciate it. Thank you.


To which I replied:

How old are you and when were you adopted? I have a daughter and was married to her mother and unfortunately was in a place where I couldn't stop it (prison), but she put our daughter up for adoption. That would have been in 1967 or 1968. I've often wondered what happened to that little girl. If it's possible it was you, I would absolutely love to meet you!

Blue skies,
Les Edgerton
Here's a place with my photo and some info about me. Nowadays, I live in Ft. Wayne, IN.
lesedgertononwriting.blogspot.com/


And she came back with:

Well, that would match. I was born in 1967. Wow, a lot to take in, going from no history to this in a matter of minutes. I would very much like to meet you. Let me know some times that would be convenient. I was adopted as an infant and given no information. I am so overjoyed right now.


I replied, sending her my contact info and the little information I had about her mother. She sent me the following email:


It should take us about 2 hours, to get there, I hope that is okay, which would be about 1730 hours. My husband, Joe, is a finish carpenter, though he can do most any type of general contractor work. My daughter, Nikole, is a supervisor with Forte Residential and Home Health Care Services, working with families with disabilities. She is a certified behavioral technician, having passed her boards for that this year. She graduated from college in Nebraska in 2013, completing her BA in 3 1/2 years, while working 3 jobs, (I am a little proud). She recently took the job with Forte after working for several years with Meridian as a behavioral clinician. She was very good at her job, however she was given several of the worst cases of child abuse/neglect in St Joseph County to handle during that time, and needed a change for her own mental health. I am a Public Service officer, certified in mental first aid, assisting individuals in crisis, group crisis intervention, and suicide prevention. Fortunately, I've only had two seriously suicidal people recently and one who was homicidal/suicidal, and all three ended well. I also train all new hires. In 2013, I had a several tumors removed, one of which was over 5 lbs, and apparently was not breathing for a little while during the surgery. During that same time, I had to be cut open in the doctor's office to relive some bleeding that was pooling and apparently could kill me. The doctor had to cut me open in her office, without benefit or anesthesia, or even Listerine, (I asked), I didn't yell at all, not wanting to scare the other patients, but my poor husband passed out. Apparently, I was squeezing his hands too hard. He is a very wonderful man. We spent a lot of 2011-2013 in and out of hospitals, (everything is good now), and it was very hard on him, so he goes a little overboard on the protective side sometimes, but I figure he earned it. He is very excited to meet you. The tumors and cancer were what started my quest in earnest, as I had no medical history. We had my daughter checked and she was at risk for some of the same things I had, which we dealt with immediately, so she won't have to go through the years of pain, but I wanted to try to find out everything I could to help ensure her health. I didn't dare hope I would actually find a close family member, let alone birth father. I had applied for my birth certificate, as soon as it became possible on July 15, but still have not received it. I had no information to go on, it was a closed adoption, didn't list even a city of birth, my birth certificate was actually issued April of 1968, my birthday being Oct 8, 1967. My dad offered to help, but I wouldn't have put him in that position, he always worked so hard to protect me, I wouldn't knowingly create another issue for him. Finally knowing that I have family and that family wanted me and wants to meet me, is wonderful to hear and over whelming. I am very excited to meet you and hope that I do not disappoint. I am overjoyed to hear I have more siblings, too!!


Maria, I was "downstate" when you were born, but I'm pretty sure it was in Memorial. When Sherry put you up for adoption (against my will), she'd given you a name but didn't tell me. But you had a legitimate birth and a legitimate mother and father. That was very important to me and why I insisted she marry me, so that you wouldn't be illegitimate. I don't understand why none of this info was made available to you. You weren't some illegitimate baby at all. I wish I could tell you more about Sherry but I was only with her for a few months. She was a very small blonde and worked in the office of an insurance company and I don't recall the name, alas.


I was so overjoyed to read in your book that you wanted me and that you tried everything to keep me. That it was in there, without your ever knowing if I would read it, means that it was how you really felt and that means more than if I had been told that my birth parents named me this or did this or that.


Well, we met in person when Maria and her husband Joe came down and spent Monday evening with us. I can’t begin to describe the feelings I experienced during that time. Maria looks like me (poor girl!) and it turns out we share a lot of genetic traits. She’s already corresponding with her new sisters, Britney and Sienna, and they’ve all made plans to meet and are all excited to have a new sister(s). Mike is also anxious to meet his new sister.


She’s just an amazing person and I’m so blessed to have been able to meet her and begin a relationship with her. The timing of this is just incredible. Adrenaline Junkie had just come out a day before she found out I was her father and I’d written about her in it and it meant the world to her to find out she was truly wanted. She told me she’d always had a feeling of being unwanted all her life and it meant so much to her to find out her birth father had really wanted her.


So that’s it. I have a new daughter and my life has been immeasurably enlarged and blessed. As happens so often, true life is much more interesting than fiction! If I never make a dollar from my memoir, I’ve already earned a treasure from its existence.


P.S. If you’re interested, a full account of Maria’s birth situation is in my memoir.
Posted by Nigel Bird at 10:25