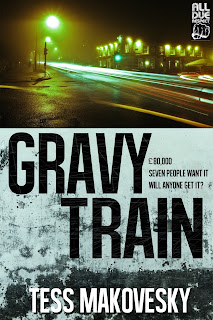 It's a rare sunny day in Birmingham (the original one in the UK). I'm heading for Cannon Hill Park, a vast open green space (yes, the city does have green spaces, read on for more of that) on the borders between Moseley and Edgbaston. Tess is already there, perched on a bench near the boating lake, swinging her legs and looking worryingly as though she's plotting a murder. Mine, perhaps, if I don't get this interview right...

I recognise the bench from a picture on her Instagram account. It's the same one that a duck pecked Todd's backside through, mid-way through Gravy Train (US). That book is set in Birmingham, in a myriad locations including this park, Moseley itself, a back-street boozer near the Jewellery Quarter, and of course, Birmingham's sprawl of canals.

Which brings me rather neatly to my first question. Nervously, I clear my throat.

So, where did the idea for 'Gravy Train' first come from?


You can blame Birmingham's canals for that! The city has more miles of canal than Venice, and the police are always fishing odd things out of them. Not just litter and shopping trolleys but dead bodies, and in a case that made the local papers about four years ago, an entire bag of money.


This was unusual enough to make all my crime-writing instincts start squawking. Where had the money come from? How had it got there? By accident or design? And if the latter, what had the people who put it there hoped to achieve?


At the time I wrote a very tongue in cheek flash fiction story inspired by the idea, called rather inevitably, Money Laundering. It was published on the online website 81Words.net, and also appears in their anthology of collected stories from the site, which is available on Amazon if wet money floats your boat...


Usually when I write a story it satisfies the creative urge on that subject. But the idea stayed with me and I began to plot out just how that money might have made its way into the canal, and who it might have got involved with along the way. And suddenly, the outline of Gravy Train was born.


You set both this book, and its predecessor 'Raise the Blade', in Birmingham. You must know the city quite well?


I moved down to Brum in the mid-1980s to work, and ended up living there for over twenty years. As I don't drive I travelled everywhere either on foot or by bus, so I got to know places that most people never even notice as they drive past at thirty miles an hour.


Although the city has a reputation for being nothing but motorways, factories and dull 1960s concrete, there are actually all sorts of unusual nooks and crannies if you know where to look. These range from swathes of Victorian and Edwardian suburbs to stately homes; medieval manor houses and churches to gleaming modern office blocks; dodgy back alleys to tree-lined boulevards. And of course, those canals!


Although the city council works hard to preserve the city's heritage, things are always changing and every time I go back I discover something new, so it's a place that's full of surprises and well worth getting to know.


What's all this about a link to Pink Floyd?


Guilty as charged! I'm a huge fan of the band, their music in general and Roger Waters' brilliant lyrics in particular. When I was writing Raise the Blade I realised that the lyrics for their track Brain Damage (from the famous Dark Side of the Moon album) summed the book up perfectly. I nicked a tiny fraction of the lyrics for that book's title, as well as hiding other references to the track, and to Floyd in general, throughout the book.


When I came to write Gravy Train it seemed like a good idea to carry on the Pink Floyd connection, so that title is also from a Floyd track - this time Have a Cigar from Wish You Were Here. Again, the lyrics match the ethos of the book perfectly, and again I've scattered references to both that, and the equally appropriate Money (Dark Side of the Moon again), throughout the book. I hope readers have fun spotting them!


Although I've never managed to see the band live, I did stay up into the wee small hours to catch their amazing reunion at Live Eight, and have also seen their official tribute band Australian Pink Floyd, in Birmingham, several times. And last year I went to the fabulous Their Mortal Remains exhibition at the V&A museum in London, which was an adventure in itself - and which I've just realised would make a brilliant title for a book...


Are your characters based on real people?


Well, I don't know anyone called Ballsy McBollockface if that's what you mean!


But no, this time around the characters aren't really based on anyone I know. In Raise the Blade some of them (the over-bearing Gillian, for instance) were amalgamations of several people I'd met, but for Gravy Train I didn't seem to need that extra prompt. The characters were already there in my head, and spilled out onto the page ready-formed.


The only exceptions to that are Justine and Fred. They first turned up in my short story Wheel Man, published in the Drag Noir anthology by Fox Spirit Books. I loved writing that story, and when the plot in Gravy Train called for a car thief, it seemed silly not to turn back to Justine and finish off her story. I hope the readers agree.


Are there any more Pink Floyd-inspired, Birmingham-set books in the works?


Funny you should ask! I'm currently scrabbling around on the 50th rewrite of another crime caper set around those same canals, and featuring a bizarre getaway on a narrow boat. It's called Embers of Bridges, which is cheerfully nicked from the Floyd track High Hopes (The Division Bell) - one of my all-time favourites and a perfect fit for the melancholy and suppressed anger I'm writing about. I'm hoping to finish it in the new year, and submit it to All Due Respect after that. Whether they'll actually like it is another matter!


As well as that, I have a dark psychological novella called Consumed by Slow Decay which is set in Birmingham again but inspired by the rather odd case of a body discovered under the tarmac of a car park in Manchester. And as well as that, I've penned a few chapters of another book which doesn't even have a proper title yet, but which features Edgbaston Reservoir and a bloodthirsty murder in the first few chapters!


All three still need a ton of work. I just have to tie myself to my desk and find the time to actually finish some of them...


And that's that. I've asked my questions, and I'm still here to tell the tale. She hasn't killed me, or even threatened to write me in as a victim in her next three books. Then again, I did happen to mention that I quite like Pink Floyd too.


I fold away my notebook, tuck it into my handbag, and turn to shake her hand. Then I squawk. There's a sharp jab from something small but very hard, right through the slats of the seat. I look at Tess but her hands are folded on her lap. There's a mocking quack.