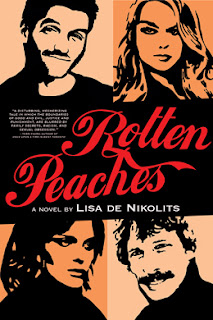 I’m, waiting to interview Lisa de Nikolits, author of Rotten Peaches. I’m unavoidably early (I’m always early) and I’m annoyed the author isn’t here although she does have twenty minutes grace. Oh look, there she is, she almost collided with a couple, one of those awkward door-tangling episodes. Lisa looks perplexed as if Starbucks is an alien world, confusing and inhospitable and she’s gazing around, peering nearsightedly at her phone. I stand up, making lifeguard signalling motions and I finally catch her eye. I have her books piled up on the table and she waves back at me, smacking a hefty man on the shoulder. She apologizes and heads towards me, threading dangerously through the tables and nearly knocks a venti something or other into a teenager’s lap and the teenager scowls.


Lisa apologises for being late, I assure her she wasn’t, and we chat about who’d like to eat and drink what and Lisa goes off to procure a venti Pike for me and a pumpkin scone, and a grande non-fat, no-foam latte for herself, with a Marshmallow Dream Bar on the side. I wanted to do the purchasing but Lisa’s order was far too complicated and I let her do the honours. I watch her. She’s shorter than I expected her to be and she looks older, tired. She’s quite chatty to the barista and I tap my pen impatiently against my notepad.


When she returns, we get settled and I launch right into it.


The one where you are submerged under water and you can’t breathe and you can’t make your way to the top. You can see the light shining down through the water and it’s like you’re lying on your back on the bottom of a murky pond, you’re Ophelia, sunken and there’s no escape.


I meant your worst nightmare in real life, the worst situation you have been in or could imagine being in.


Real life is so boring! I far prefer to think in imaginative terms.


Real life is boring? Isn’t that what inspires you?


No. My imaginary life inspires me. Reality is a killer. Hour upon hour of mind-numbing tedium… that’s real life for you.


And yet you come across as someone endlessly fascinated by the people and minutiae around you! I’ve read all your interviews.


I am fascinated by life, you’re right. But only as a base ingredient for what my mind can do with the thing. In and of itself, what I observe around me is merely a starting point.


And what is the catalyst for turning a dull base chemical, as it were, into a magic potion for a story?


[Laughs] Honestly, I have no idea. I guess it comes to down to having a good imagination, a touch of psychosis and an almost pathological commitment to being a writer.


With the emphasis on psychosis, I’d like to discuss Rotten Peaches with particular attention to the two secondary characters, the two love interests. JayRay, the conman, and Dirk, the Afrikaner who wants the old South Africa back and who will do anything to try to make that happen. How did you come up with them?


I always loved Frank Chambers, the conman love-interest in The Postman Always Rings Twice (James M. Cain), and I wanted to write my own spin on that kind of guy. I had a lot of fun with JayRay, he’s one of my favourite characters! He’s so sleazy and so gorgeous!


Dirk was inspired by an ex-boyfriend, an Afrikaans man with strange moral boundaries that were dictated to him by his Church and People – the Afrikaans morality. I wondered what happened to him in the new South Africa and that became an interesting line to follow.


Both of those characters opened up fascinating plot lines for me and writing the dialogue was a blast! As a writer, it’s the greatest gift, when characters present themselves, fully formed, script in hand and a bunch of warped ideas! It creates so much opportunity.


Rotten Peaches is primarily about love, lust, greed and obsession. But there is racism too. Can you talk a bit about that?


I was born in the era of apartheid and I grew up in it. Voting for Nelson Mandela was one of the most beautiful moments in my life. It was a time of wonderful optimism and hope, it was truly amazing. I always wanted to write about the apartheid experience, as a way to acknowledge the terrible wrongs that existed when I grew up.


We had a housekeeper, although in those days we simply called her the ‘maid’ even although she was a woman in her thirties with her own children. I never even knew what her surname was. Betty. And I wanted to apologise to Betty by writing about her. It doesn’t make things right, of course it doesn’t, and Betty, my real Betty, will most probably never know about the book, but sometimes you write about things that have worried you in your life, things you can only put right in fiction.


You have described your writing as Little House on The Prairie meets Pulp Fiction. That’s quite the combination, can you explain this?


[Laughs] Yes, well there is a farm scene in Rotten Peaches which starts off feeling all peaceful and lovely and then it’s like Quentin Tarantino arrives and it gets quite nasty! I like to take ordinary lives and ordinary people and then use the worst ‘what if’ that I can imagine. But my ‘what if’ definitely has a noir spin to it, noir with some humour.


Yes, let’s talk about your humour in writing. Is that an intentional writing device to ease plot tension and bring depth the characters or why do you use it?


I don’t use it, it uses me! I don’t have as much control over my writing as I’d like – honestly, it pops out and I’m like a bystander, mouth open, going okayyyyy…. But that’s what makes it hugely entertaining. I’m not funny by nature, I hate watching comedy, it really stresses me out.


What kind of person doesn’t enjoy comedy? You have to explain more!


I just don’t! Half the time I just don’t get the joke! But that said, I can watch Ace Ventura, Pet Detective on repeat and I never stop laughing. Or Dumb and Dumber. Cracks me up! I don’t write that kind humour of course, mine is more satirical, wry. I think I have a rather cynical view of life and that comes out in humour. But it’s as if it was written by someone else – like when I read JayRay’s comments, I wonder where they came from!


Do you have a writing routine?


I just do as much as I can in a day before I fall over. I have a day job, I’m a graphic designer/magazine art director, although these days magazines are as rare as hens’ teeth, so mainly I do graphic design. Which is actually a lot easier than writing! Writing is a very tough gig! So I do as much as I can at night and on the weekends. I have a running to-do list when it comes to my writing and it’s very long! My motto is this: Do One Thing A Day For Your Writing and I stick to it. One sentence or 10 000 words, it doesn’t matter, just do one thing.


Tell us about a few things on the to-do list.


I’m doing a lot of readings for Rotten Peaches which I always enjoy. Going to festivals, reading from the book and being on panels is always such a treat after all the hard, solitary slog of getting the book out there!


I’m also working on a short story, Hit Me With Your Pet Shark, for the anthology In The Key Of Thirteen, which will be published by The Mesdames of Mayhem in 2019. I’m a member of the Mesdames, we’re a collective of crime-loving ladies (and two gentlemen!) and it’s a great group of superbly talented people.


The Occult Persuasion and the Anarchist’s Solution will be coming out in 2019 and I need to do a lot of self-editing on that! I am working on another noir novel, The Weegee Doll, and I have the fledging idea for a time-travel crime novel called The Rage Room, although I do seem a little stuck on that one which is frustrating! There might be nothing there! I’m also looking forward to going to Milan in April of next year to launch Una furia dell’altro mondo (The Fury From The Other World), the Italian publication of No Fury Like That. So there is lots to look forward to, lots to keep me out of mischief! Although being mischievous is so much more fun than not!


Readers, keep reading and writers, keep writing! Books (and fat-bottomed girls!) make the rockin’ world go round and let’s keep it that wayFor more information, check out Innana Publications ('essential reading for feminists the world over').