One Man's Opinion: THE BRICKS THAT BUILT THE HOUSES by KATE TEMPEST 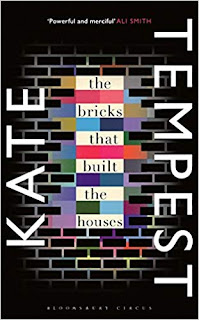 Kate Tempest is an extraordinary poet. She musters power and depth and windows into humanity with such a brutal honesty and turn of phrase that it’s impossible to remain untouched.


Her novel, The Bricks That Built The Houses (US) often reflects these strengths.


It opens with a burst of excitement. Harry, Becky and Leon are leaving their home town with a bag of money and their hearts pounding like crazy. They’re not safe. They’re on the run. South London is all they really know. It’s a catchy start and an edgy one.


From this point on, we’re draw back to the beginning of this tale – their journey from a late night meeting at a drug deal through to the danger of what lies ahead.


Having established our main characters, the novel takes regular tangents to fragment into vignettes of the bricks that built the houses. There are back stories galore as we get to understand the lives of each family member in some depth. Each of these pieces is well told and has enough intrigue to pull a reader in. Though the key narrative gets lost through this process, the book never loses its energy and drive. Lives overlap. We get to understand that every person has a tale to tell. That the histories that are hidden well beneath the surface are tough, exciting and incredible.


Each individual story forms a circle. When these circles come together, they fill the canvas like a pointillist painting.


The simile there may be terrible, but it draws me to a key element of the writing. The description here is stunning. Whether it’s the urban landscape or the body that’s on view, the pictures are painted in such a way that they burst from the page. It’s really quite something. It’s also something that can get in the way of the plot on occasion and could maybe become stronger with a touch of dilution.


I really enjoyed Bricks a lot. I’d often stop reading and immediately want to pick the book up again, which is always a good sign. That’s not to say it was perfect. In fact, there are lots of flaws that are difficult to overlook.


The exploration of each character’s back story may be well-handled, but the novel begins to feel the weight of all those tales by the end. Momentum slows a good deal before sparking back into life at the conclusion.


There’s also an issue with the range of character responses. Too many of them experience the world in the similar ways. Their biologies are almost identical. Their reactions could be interchangeable. Which, of course, may be the point, who knows?


As the strands of the work came together and come close to getting back to where things began, the energy fizzes and sparks. It’s a change of pace that is welcome, but is also slightly incongruous. In many ways, if the individual elements were surgically removed and reworked, there could be two novels here, a well-paced crime drama and a literary gem.


All of those issues may have fallen to the back of my mind had it not been for the ending. The ‘what happened next?’ element arrives and drags down the energy so that it disappears even more quickly than it came. It was something of a let-down and I’d rather have had the ultimate conclusion left to my imagination.


Which all seems rather damning.


It shouldn’t. In spite of the things I feel were wrong, I still found the read compelling and would recommend it without much reservation. There are so many things to like and so many touches that need to be experienced that I hope you’ll give it a try.
Posted by Nigel Bird at 08:57