One Man's Opinion: THE WINTER OF FRANKIE MACHINE by DON WINSLOW 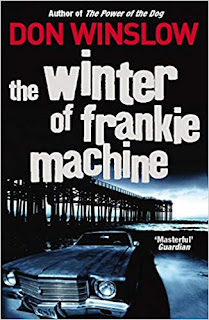 'Me and Frankie M., we got balls.
I just gotta blow Frankie's off.'

Everybody loves Frankie Machianno, aka Frankie theMachine, aka Frankie the Bait Guy. The fishermen, the Little League kids, the students from the drama club, the soccer kids, the surfers, ex cops, his ex wife, his lover, his daughter, the basketball players and the local Vietnamese community.

And I love Frankie, too.

Frankie's past is more colourful than most. He has been a hitman, amongst other things, for the mob and has earned the reputation for being the toughest and the best that is well-deserved. Not that you'd know it from the opening chapters. For the first forty pages, we just get to know the guy. There are tasty hints of what might lie ahead, but in the main we find out about is his daily routine and about the things he cares for the most in life. It's a crucial section of the novel as it lays down the foundations of the man and gives us all the material we need to want to root for him all the way to the end. What is so impressive here is the way that this introduction is never dull. There may not be anything explosive to latch on to, but the smoulder is a pleasure.

I'd have been happy to carry on in the same vein for a lot longer, wondering how he was going to pay for his daughter to go to medical school and maintain order on the pier, but that wasn't to be. Instead, in chapter seven, Frankie returns home to find an unfamiliar car in his alley. He's been waiting for such a visit for many years and is prepared to deal with whatever appears before him.

Unfortunately for Frankie, this is no ordinary meeting. He's been set up with bait as good as the stuff he usually sells, while Vena awaits him offshore ready to gut him and send him off to sleep with the fishes.

But this is Frankie the Machine we're talking about. It would take a hell of a surprise to bring him down. Needless to say, he gets himself out of the problem. In doing so, he opens himself up as a target for the mob and goes into hiding. What he needs to find out, and quickly, is who ordered the hit, who sanctioned it and why. If he can do that, he can either clear up any misunderstanding or wipe out the problem in a different way.

The remainder of the book works by shifting from flashback to the present. We get to know how Frankie earned his nickname and also to follow his increasingly tense foray into saving his life.

Those forty pages at the beginning earn their salt as the story unfolds. Without them, the strength of bond to the protagonist wouldn't be there. It would still be a great read, but the power of the connection elevates it even beyond that.

The Winter of Frankie Machine (US) is a class act. It brings in all the warmth, romance and nostalgia of the mafia while also reflecting upon it and pulling it apart as a pile of bullshit. In the end, what seems to be important to all the people who lived through the period of time covered is that everyone had their day. It's only Frankie who seems to understand that it's not enough to live in the past and that it's the present and the future that mean everything.

This one's a real winner. A real delight. A guaranteed hit.