One Man's Opinion: THE ASPHALT JUNGLE by W R BURNETT 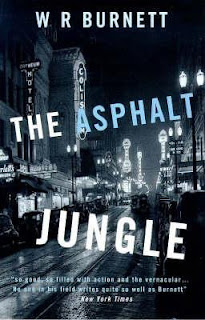 Theo J Hardy is the new Police Commissioner. He’s straight, determined and ready to clean up the act of the force he oversees. He has his hands full with his colleagues and the press, so when the infamous heist planner, Riemenschneider  (aka Herr Doktor, aka The Professor) finishes his spell in prison, Hardy’s not to happy that no one has noticed.  Riemenschneider has disappeared into thin air and the cops have no angle to track him down.


I say thin air. That’s not exactly the case. He’s turned up at a gambling joint run by the shady Cobby and he’s ready to put into motion the perfect crime. To put everything in place, Riemenschneider requires a team and a bank roll. In order to find these, he insists on seeing the biggest cheese and slipperiest bastard on the block, Emmerich.


Now Emmerich’s in a spot of bother. He’s spent all his dough on a dame. As well as supporting his bed-ridden wife at home, he has another house in which his sexy young thing enjoys all the trappings of luxury that money can buy. The tax people are after him and the prospect of a huge hit on a jewellery store is irresistible.  In order to keep the balls in the air, he has to come up with other alternatives and prepares various plans in which he will end up double-crossing someone or other.


Dix is the Italian Stallion. At least he used to be. He’s been tamed by his wife and is besotted with his new son. He’s almost gone straight, but is keen to maintain his wealth to make sure his family are financially secure.


Dix and Brannon are hard men. Big tough guys who both play their cards close to their chests. Dix is batting for the gang, Brannon for Emmerich. There’s a showdown in prospect and you can almost smell the testosterone and the blood from the first moment we sense the pair will come together. The ensuing battle doesn’t disappoint and, as has to be, only one of them can walk away.


Gus is a hunchback. He works a diner counter. He has good beef for his friends and Grade B and C burgers for everyone else. He has a temper, a surprising power and he’s connected to everything that happens in the underworld crime scene. As it happens, he’s also a big fan of Dix’s and will back him all the way and make sure that he stays safe, no matter how many cops or villains are after him. Gus’s knowledge and connections spread everywhere like the sewers under the streets. There’s not a corner he doesn’t know or a sharp he hasn’t come across.


What happens when all these characters come together and the heist is played out is gripping. The plot shifts as fortunes rise and fall and circumstance changes. The robbery itself is tension-fuelled and the police chase is always engaging. The highlight, however, is the interplay between the criminals and the observation of the ways their loyalties split and fuse while their world turns to shit.


In the end, I was rooting for almost everyone. If it were possible, it would have been great for the cops to succeed and for the robbers to get away (most of them, at any rate), but that can’t happen.


The rounding off of each individual’s journey is compelling and triggers an emotional reaction. It didn’t all pan out in the way I hoped it might, but if it had it would have been much less of a book that it is.


The Asphalt Jungle (US) is cracking read. Thoroughly enjoyable from start to finish.
Posted by Nigel Bird at 15:19