Me: Lisa Black, despite the courteous welcome, is actually pretty damn antisocial. She would rather be left alone than share her thoughts with someone. She would prefer to sit on the lanai and read a book, or go biking, or frankly do laundry instead of conversing so I gave her a vodka and Sprite Zero Cranberry to loosen her up.


It didn’t really work. It’s unseasonably cold in Florida at the moment, so perhaps I should have gone with a hot chocolate martini. I waded in nonetheless.


LB: Seriously? Come on! Start with an easier one than that.


Me: Um, okay. Why do you write murder mysteries?


LB: What else is there?


That seemed to settle that, so I tried another direction.


Me: Give us the synopsis of your series. 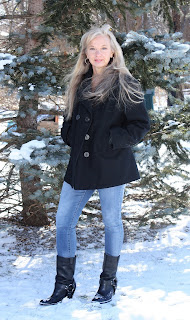 LB: Maggie is a CSI in Cleveland, Ohio. Jack is a homicide detective who has killed criminals when he did not believe they could be convicted. This is his life’s work, and he’s very serious about it.


Me: How is he different from Dexter or Charles Bronson…what was his name in the movie…


LB: Paul Kersey. They both enjoyed the killing. Jack doesn’t. That’s why he tries to make it as quick and painless as possible. To him it’s an unpleasant but necessary task.


Me: Why do you write about a homicide detective who kills people?


LB: I don’t know. I’m not trying to be a pain! But I don’t know. It just seems to me a logical extension of behavior. You have these bad people doing bad things, so kill them. End of problem. That’s how Jack sees it, and it baffles him just a little why the rest of the world can’t admit that it makes perfect sense.


Me: What if he gets the wrong guy?


LB: He doesn’t. He’s very, very careful about it. At least he hasn’t yet. I know I should have a plot in which he does kill an innocent person, to make the lesson about why vigilantism is a bad thing and why we have to live by the rule of law. But I think that would be little cliché. Just as I should write a plot in which Maggie encounters someone so terrible or personally threatening that she does a one-eighty and asks Jack to kill them, but I don’t want to do that, either, because it’s been done.


Me: So your writing is all unique.


LB: I didn’t say that! I’m sure I hit lots of clichés. But only the ones I like. In my opinion, clichés are clichés because they’re universally true, and we never get tired of them.


Me: So what’s this particular book about?


LB: About the financial crisis, believe it or not.


LB: I got fascinated by the financial meltdown and the housing bust, and had to work it into a book. So Jack and Maggie investigate a predatory lender who is eviscerated on the marble floor of her mansion, and have to enter the shark tank of a financial firm to find out who did it.


Me: Okay. What are your strengths and weaknesses as a writer?


LB: I think one of my strengths is dialogue. Not that I am terribly observant or have a great ear, I don’t, but at least it doesn’t sound as if it were written by an English teacher. And I’m good at sticking to the story without digressions. You can’t be self-indulgent when you write. I’m not too good at describing things, but happily I go by Lawrence Block’s dictum that just about anything can be described in one sentence. My biggest weakness, I think, is characterization. I tend to make my characters, they’re there, they are who they are, and that’s all you need to know. I can’t make them grow and stretch and suffer and have pages of internal monologues very well. I’m accustomed to looking at a murder case with a great deal of detachment, so it’s hard for me to make my characters feel personally involved. That’s necessary for fiction, but it’s a really bad idea for real life.


LB: I’m about as tough as a half-drowned kitten. I’m a middle-aged white lady from the ‘burbs. But it is the ‘burbs, so I don’t have to be tough. On the other hand, I can stroll up to a badly decomposed corpse without batting an eye, so I don’t feel the need to prove anything to anybody.


Me: Except that you can write?


LB: Well, yeah, that. In my opinion the jury’s still out on that.


Me: Does it get depressing, working around all those decomposed corpses?


LB: No. I prefer to think it has made me appreciate life. I’m very practical about death, in my humble opinion. I don’t want to live forever. My plan is to do everything I want to do, go all the places in the world I want to go, before I’m 60. Then from 60 to 70 I’ll sit on my lanai and drink wine and read books. Then at 70 I’ll be ready to go. Of course that’s easy to say at 54. I might have a different idea at 70.


Me: So you have a bucket list? What’s the most unusual item on it?


LB: I want to be on an episode of Drunk History. I’d be adorable on Drunk History!! I’d tell them about the Torso Murderer of 1930’s Cleveland. Though they usually have more uplifting stories than a never-caught brutal serial killer, so that must be why I’m not on Drunk History. Yeah, that’s it.


Me: Do you want another vodka?


LB: Now that I can make (some) money at it, I write to make money. But I wrote for many, many years without making any money at all, so I really have no idea why I kept at it. I just did.

Perish is available here.
Posted by Nigel Bird at 11:42