One Man's Opinion: LET THE NORTHERN LIGHTS ERASE YOUR NAME by VENDELA VIDA 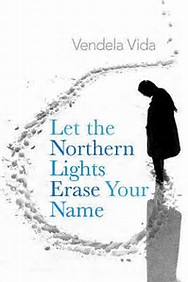 ‘Being with you guys...’ he said. ‘I’ll never leave. You know that, don’t you?’
I nodded. I had taken the suitcases from his closet and hidden them under my bed.

Let The Northern Lights Erase Your Name (US) is a gem of a book. It tells a complicated story in the simplest of ways.

Told in the present tense in a first person narrative, the novel explores the inner workings of Clarissa Iverton who has just discovered that her dead father had no biological connection to her. She tells of her unusual upbringing and of the significant details of her early life. It is often in the tiny incidents that the most profound impact has been made.

Clarissa sets off to find her real father, a journey that takes her to the extremes of northern Europe.

In Lapland she’s a complete outsider, but that’s nothing new to her – she’s been an outsider for her entire life.

What unfolds is a beautiful tale. The images constructed have the ability to take your breath away:

And then there’s the poetic:

‘Above me, the moon was a comma in the sky, a conjunction between days.’

Given the nature of her travels, I found it difficult to understand how the author managed to make the situations so compelling. But she did. Chapter headings were enticing. Stories were left unresolved until later reflections. The resolution of each drama led to a new conflict or need in Clarissa. I wanted her to find everything she needed along the way and the drive of that, in itself, was crucial.

This one is spellbinding. I felt moved on many occasions and now I’m wondering if I should let my fourteen year old daughter into the secrets it holds (there is some adult material I’m not sure she’s ready for, but in all likelihood she probably is). I reckon if I can persuade her to go along, the power of the read will stick with her forever. If it goes to plan, I’ll hold it in reserve for my other kids when the time is right.

One slight niggle for me is the final chapter. In some ways the ending didn’t seem to fit. In others, it was perfect and was everything I wanted it to be. Which is why this is perfect book group material – if you take it on, invite me along – I’d love to know how you found the climax.

Wonderful.
Posted by Nigel Bird at 12:31