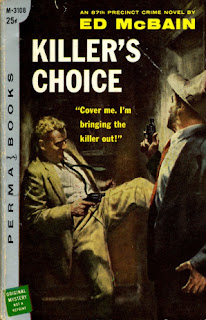 When we meet Annie Boone, she’s been shot to pieces in the liquor store in which she works. The place has been wrecked and smashed glass and alcohol fumes are Annie’s resting place.


As the police investigate the murder, they discover that Annie is a woman of mystery. She had multiple personalities and each of them has a corresponding suspect to track down. The trail takes us through the creative world of the photographer, the seedy world of the pool hall, the stiff-upper lip of society, the boozy world of bars and broken-down musicians and to one of the finer department stores in the city. In each space, there’s a character who defines the habitat and a story that leaves more questions than it provides answers.


Along the way, we lose a cop and we gain.


Detective Roger Havilland meets his maker. He’s one of the real bulls in the detective pool, a man embittered by an early experience when he was trying to be kind. McBain disposes him with ruthless efficiency in many ways, but there’s a whiff of fondness for the guy in there as the back story creeps up on you.


Enter the frame Cotton Hawes. Hawes comes from a different place altogether. He’s used to order and good citizenship, so the 87th comes as something of a shock. He is a man of good education, but clearly has a lot to learn when it comes to policing the inner city. He’s lucky in that respect as he’s partnered with Steve Carella. Carella, on the other hand, is not so fortunate. While investigating the murder of Havilland, there’s an incident that becomes the talk of the precinct and almost ends the partnership at the point of it beginning.


Killer’s Choice (US) is a cracker. The layers of our victim and of the city are slowly peeled away until the cases are brought to conclusion. The angles aren’t neat and Boone’s killer isn’t easy to spot, which makes the unpicking of the crime hugely satisfying. Throw in our new man Hawes and you have a police procedural to savour.
Posted by Nigel Bird at 11:53