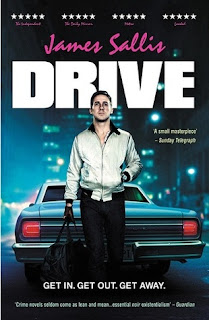 ‘He looked back at the open door. Maybe that’s it, Driver thought. Maybe no one else is coming, maybe it’s over. Maybe, for now, three bodies are enough.’


We meet Driver in a mess of blood and bodies. What follows is the story of how he ended up in such a disaster in the first place and the journey he takes to try and stay out of trouble with the guys who are after him.


Arcing back and forwards between the past and present is a complicated business for most of us. Thankfully, Sallis lays it out in a way that feels simple and means the strands fit together as smoothly as most of the rides Driver takes the along the way.


We learn of Driver’s upbringing. The way he survived troubled waters to become a leading stunt driver and a getaway star for armed gangs.


Dabbling with the criminal underworld soon becomes so lucrative that his day job loses its appeal. It also leads him into a life-or-death predicament when he ends up holding a large amount of cash that he shouldn’t have and doesn’t particularly want.


The layers work really well with each other. They have an easy symbiosis that helps to deepen the interest and to make the protagonist more intriguing and sympathetic.


Driver, himself, is a fabulous character. He’s patient, talented, intelligent and loyal. He’s also ruthless and old-school and believes there should be honour among thieves.


Keeping him company is a super cast – mobsters, writers, family and the old doctor who is able to put Driver together when he needs it.


Short chapters and tight prose keep the book cruising along. There’s conflict and tension in abundance. Backstory is a bonus rather than a millstone and the author has his usual poetic and profound moments as he creates phrases that can resonate and hit hard if you let them.


Thoroughly enjoyed Drive (US) and I recommend it whether you’ve seen the movie or not.