One Man's Opinion: THE MUGGER by ED MCBAIN 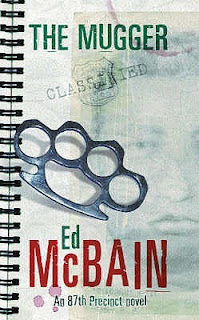 'They write songs about Saturday night.
The songs all promote the idea that Saturday is a particularly lonely night. The myth has become a part of American culture, and everybody is familiar with it. Stop anybody, six to sixty and ask, 'What's the loneliest night of the week?' and the answer you'll get is Saturday.
Well, Tuesday's not such a prize either.'

The Mugger (US) is the second book in the 87th Precinct series. It takes a slight detour from the first in that Steve Carella is on his honeymoon and is out of the picture.

Two big cases dominate, one a series of muggings against women by a deluded criminal who believes he is a gentleman of sorts and the other the killing of a young girl. There's also a third, the disappearance of huge numbers of cats in another precinct, but that's an aside that's there to add texture and a very good joke.

There's the usual gripping tension and expertly handled solving of crimes here. You get the hard-boiled nudges in the ribs and thick slices of humour. The camaraderie is enough to make you get up and join some kind of club and the dose of romance tells of personal frailty and general fragility.

Above all, the story told is about the elevation of Bert Kling from patrolman to detective third grade. He gets involved in a personal case after hours and functions as a private eye for a while. His job is to find out what's happening in the life of a school friend's sister-in-law, a beautiful young woman with a huge secret. As you might expect, he gets into things further than he could ever have imagined as an unexpected turn alters his life forever.

It's great to spend so much time with Kling. He's one of the stars of the show and getting to know him from the roots up was a real treat. Definitely worth a read whether as a one off or as a delicious piece of an unbelievable whole.