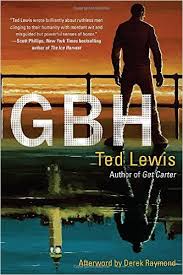 GBH (US) is an assault on the senses.

The protagonist’s life is split into two alternating sections, The Smoke and The Sea.

In The Smoke, we’re in the past. George Fowler is leading a successful and violent criminal gang that makes most of its money peddling porn movies. For Fowler, his cold ruthless wife and close associates, the world is controlled through fear and the perpetration of enough acts of terror to keep that fear alive. Problems arise when it becomes clear that someone in the organisation is no longer playing by the rules. This heightens tensions between Fowler and the other major players in London’s underbelly and their friends of the law enforcement variety. Fowler sets about smoking out the rats from the nest and in doing so risks setting the entire operation ablaze. The story in the city is taught and strained like a muscle pushed to its limits.

The Sea is told in the present tense and has Fowler in hiding in a down-on-its-knees seaside resort. This allows for reflection on what’s been and along with this comes detailed description of the world he inhabits. Having lived through extreme horrors and lost much of what he held dear, he is drinking heavily to find another kind of escape. Though he should find it easy to lie low, he can’t relax. Paranoia engulfs him and he can’t break old habits of trying to fathom exactly what is going on in the world around him. Those he encounters become potential threats and as he tries to work out their motives he slowly tears himself apart.

The tension and pace mean it’s difficult to break away from.

Lewis does an amazing job of creating an environment of menace and perversity without ever really shining a torch directly upon it. The most sinister aspects are told through suggestion, intimidating settings and sharp similes:

‘I strike a match and light the fire. The newsprint crackles like the sound of small bones breaking.’

The finale is held tantalisingly in the near-distance all the time and the way this is done means the appetite for more is always kept alive.

Key to the psychological elements is the empathy engendered for Fowler. Not only is it easy to relate to his plight, it’s also impossible not to root for him in spite of all his dark deals and reign of terror.

This book is a beautiful thing. It’s for writers to learn from and readers to enjoy.