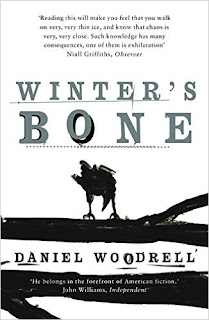 "Whatever are we to do with you, baby girl? Huh?"
"Kill me, I guess."
"That idea has been said already. Got'ny other ones?"
"Help me. Ain't nobody said that idea yet, have they?"

It might seem odd that when living in surroundings as beautiful as the Ozark hills that Ree Dolly feels the need to escape into visualisations using The Sounds Of Tranquil Shores/Tranquil Streams/Tropical Dawn/Alpine Dusk. It seems odder still given Woodrell’s immense skill at describing her environment and highlights the power and the wonder of the nature around her.

It doesn’t take long, however, to realise that she has every reason to want to switch off her mind to the burdens and the monotony of every-day survival.

The weather is unforgiving. Her dad has gone missing and has skipped bail. Worse still, he has put up the family house and land as security. When it becomes clear that he isn’t going to be showing up in court, Ree’s family face eviction and homelessness. If that weren’t enough, her mother has lost her mind and her two young brothers still have a lot to learn.

Ree sets off to find her father and delves into family business that no one wants to be looked at. The Dolly and Milton clans do their best to discourage her from looking and will stop at nothing to block her way. Unfortunately for Ree, the cocktail of desperation and determination mean that she pushes through each barrier until her own life is in peril.

Winter’s Bone (US) is a wonderful read. The brutality of life is told with no filters with the flair and craft of a real artist. There’s tenderness and affection underpinning the creation of this insane and hostile world. The cultures of the families involved is explored in a way that brings into play the contrasts and contradictions of their world – tradition, love, loyalty and pride sitting alongside violence, drugs and abuse.

The characters are solid, like monuments of Ozark stone. Their interactions and choices are a delight to follow and their slang and dialogue offer plenty of flavour throughout. They also happen to include one Uncle Teardrop among their ranks, and this guy’s as well-created a villain as you’ll come across, as well as Ree who is so fragile, strong and unstoppable that she makes a perfectly rounded protagonist.

Among the things I love about this one is the way the rhythms and tones flow and drift like a distant song or poem. The plot is always gripping and the cadence locks it down tight. There’s enough here to set it up as a future classic. This is a book that won’t be dying any time soon.