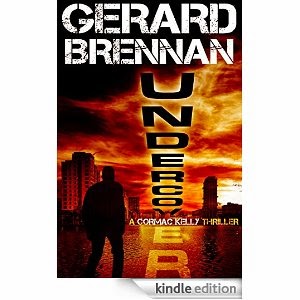 
I’m posting this a few days before the book’s release because if you like the sound of it you’ll still be able to pick up a cheap copy. It’ll be 85p or $1.32 (including tax) if you pick one up before Thursday when Undercover will be released to the world.


Mr Brennan was kind enough to send me a copy when he saw that I’d pre-ordered. Thanks, sir.


Undercover opens with an uncomfortable scene in a hostage situation. Cormac Kelly is in the unenviable position of being an undercover police officer who has infiltrated the gang who have kidnapped a father and his teenage son. It stretches Kelly’s humanity to watch the treatment of the victims at the hands of the bunch of thugs he has to work for and it’s clearly not going to end well for someone. It might be easier for him to cope if the young boy who has been taken could just accept the situation, but his reactions are spirited and strong and happen to put him in a more precarious position than he needs to be.


The mother (Lydia Gallagher) of the kidnapped pair is a feisty lady who doesn’t find it easy to keep her mouth shut when faced with connections of the men responsible. She also happens to be the agent of Rory Cullen, the new signing of Manchester City Football Club. Cullen’s a course, vain man who happens to be a great striker. He’s on tour trying to sell his autobiography. With his Northern Irish nationality it’s easy for the press to make comparisons between Cullen and George Best. Cullen doesn’t make too many of those comparisons himself – he basically feels he’s better than Best (if grammar will allow that to be).


When Cormac Kelly can take no more of the hostage situation, he takes radical steps. This leads him to be on the hit-list of the mob and also as a target for the police, who believe he has gone rogue.


What follows is a thrilling ride through the streets of Belfast and London. It’s fast paced and exciting and the twists and turns of the plot are cleverly handled by the author. One can never be quite sure where Kelly is going next and the way the cleverness and experience of the man contrast with his reckless nature constantly add drama to the story. If that weren’t enough, a mercenary security expert, bent coppers and remnants of the IRA really ratchet up the tension.


Not only is this a tense read, it also has some of Brennan’s trademarks in there to ensure that it is not simply any old police thriller. This is layered with humour, dark as well as witty, and there’s a great quality to the observation of people and place throughout.


Each chapter opens with a wonderful quote from the Cullen autobiography. These snippets are so well-written that if the autobiography were ever to be published, I’d be the first in the queue to get mine.


This one’s a fabulous read and is a very worthy addition to the already bejewelled Blasted Heath list. Super stuff.
Posted by Nigel Bird at 20:02