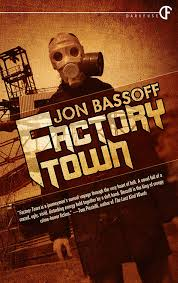 
I’m sure we all think about what the moment before death will be like from time-to-time. I’m hoping that when it’s my turn, my body will be pumped full of natural hormones and chemicals designed to take as much fear, pain and anxiety from the process as possible.


For the man who walks into a stranger’s house at the beginning of Factory Town, his journey into oblivion most certainly isn’t a pleasant experience. At three minutes to twelve, he puts a bullet in to his brain. The time is important as it is the device Bassoff uses to help us settle in to what is about to happen and the book takes a huge leap into a new space.


We meet Russell Carver. Essentially he’s in a living hell. He’s landed in Factory Town charged with the duty of finding a girl whom he believes is in imminent danger. All he has to go on to help find her is a small picture printed from the computer.


As he goes about his search, he walks down one dead end after another.


Wherever he turns, he arrives in a place populated by the grotesque. The town is described vividly, as are the characters, and the sense of darkness and depravity is really powerfully created. It's a bit like the Old Testament, only without God.


The dream-like quality to the piece is superbly crafted. It allows for unusual events to take place and for sudden shifts in time and place. The people populating Factory Town are often those who are familiar to Carver from his life. His school friend, Charlie, pops up to give him a helping hand of sorts. With friends like Charlie, Carver certainly doesn’t need any enemies, but unfortunately that’s something he’s not in control of.


Like any dream, however, it always feels real and entirely plausible when you’re in it, which only adds to the nightmare.


Carver limps from one unpleasant experience to another. He finds that there are no children in Factory Town. He comes to understand that The Cowboy is a sinister figure who controls the area. He witnesses the slow corrosion of the population and infrastructure caused by the factory that is the centre of it all:


‘Strange things are happening, he said. It’s all because of the factory. All the chemicals leaking into the town’s hippocampus.’


According to the townsfolk, there are no children in the town. No children shall be born there by decree. Carver is confused by this when he meets the torchbearer of hope in the town. He’s a young boy who dresses as a super-hero called The Annihilator. With his plastic swords he’s out to sort the world out, no matter how powerful the forces of evil are.


As the book progresses, it becomes clear that recurring themes are pulling Carver in one direction, which leads him to the truths of his own life. By the end of the read, we can understand a little about that life and about the pain and sorrow that abusive relationships can cause and how such abuse can be passed on from one generation to the next like a family heirloom.
'You need to let go of my wrist. You don't want to end up like your father, do you?'


There’s so much to like about this book. It’s relentless in its portrayal of the broken. It has a real raw power in the structure of sentences and worlds. There’s a gripping need to follow this man on his journey and as his quest unfolds and the need to understand becomes ever more pressing.  I also thoroughly enjoyed Bassoff’s trademark style of ignoring speech marks as punctuation; this allows a flow and power to conversation that is hard to find.


Factory Town is a work of real weight. It has the impact and a hold that comes with all great books. It’s also sticking around in my head weeks after reading, which says a lot. It says more that those recollections still make me shudder.