One Man's Opinion: ONCE A WARRIOR by ANTHONY NEIL SMITH 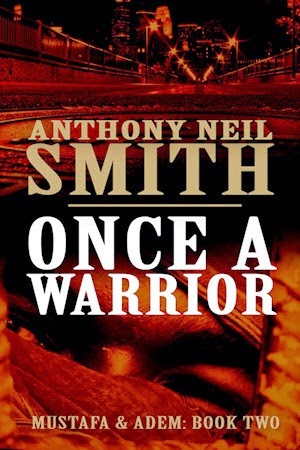 ‘Adem had come for a girl, and she was a girl worth staying for, regardless of how her soft face had been turned into a horror story of scars, holes and crust. He would have given his life for what was behind her wire-rimmed glasses and London-educated English. He should have, rather than running away from her. This time she would realize that.’


I really enjoyed Anthony Neil Smith’s ‘All The Young Warriors’. It was an amazing story told with power and craft and I was entirely satisfied by its outcome.

I was a little surprised to hear there was to be a sequel, in part because ATYW worked so very well and also because it finished rather conclusively. Even so, I liked the opener enough to give ‘Once A Warrior’ an airing and I’m delighted that I did.

Stepping into the sequel is a little bit like moving up a level in a video game. Everything is familiar, yet it’s a little more complicated and attacks the senses at a faster rate. Because there’s more going on, the reader and author have to be sharper and more alert and reaching the end is all the more satisfying because of that.

Adem’s on his way back to find his Somali love in order to find forgiveness and to make amends. She’s there somewhere and he believes he can find her if only he can follow his instincts and apply all of his passion. In order to do so, he’s had to resurrect his Mr Mohammed character and needs to travel to the Middle East under the guise of being on a pilgrimage.

Adem’s father (Mustafa Bahdoon), meanwhile, has left his job in order to return to the Southside Killaz, a gang he founded way back when in Minneapolis. Needless to say, the current gang-leader isn’t too happy about the idea and it’s not long before there’s a new war on the streets as things fly out of control. All this just to rescue a girl who has been stolen for the sex trade and to hold up his end of the family honour.

In each strand of the story, things become complicated. Neither father nor son can trust anyone completely as all allegiances seem invisible and untrustworthy. Working out who to side with goes way beyond using gut instinct and experience as both of them are stranded way out of their depth.

What is to be admired about this novel is the way Smith has expanded the territory so broadly. He’s introduced the CIA, has the complexity of gang relationships and rivalries, is delving deeper into his protagonists’ culture and religion than before and brings in a higher level of terrorism and manipulation than previously. That these various pieces can co-exist so cleverly and plausibly is a testament to the hard-centred core of the book and the way the motives and drives of the characters are so consistent and understandable. It also helps that the book is always driving forward and has a real sense of energy and tension that rarely lets up. I was completely engaged and wrapped up in this from the start and was still buzzing even when I’d turned off my kindle after the last, gripping pages.

Do you have to read ‘All The Young Warriors’ before ‘Once A Warrior’? Not at all. It stands alone and everything that you’ll need to know of the first book is dripped into the sequel seamlessly.


And which is better? I remember giving ATYW 5 stars without any hesitation. It’s even easier to do with ‘Once A Warrior’; it’s the sequel I prefer and that really is saying something.


You also get a badass called Poe in the sequel. He’s some piece of work and what a name for a villain.
This is a book that can make a long trans-Atlantic flight pass and you find yourself landing as if it’s barely been minutes since take-off. It would be perfect for the beach on a lazy holiday. It’s just what you need to take your mind off the cold outside when you’re sitting by a fire in mid-winter. It’s a great read start to finish wherever you happen to be and whatever the situation.