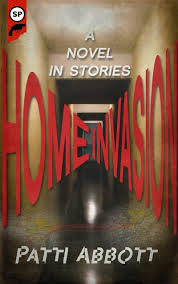 Home Invasion is a real gem of a book. It tells the story of 4 generations of a family that find it hard to play straight.


We first meet Billie, a girl who is struggling along with her over-bearing mother (Kay) and new on the scene step-father (Mickey). Kay does her best to be a good mother and a good wife, two things that don’t fit together the way she works it. Amid all the chaos of the home, the writer sums it all up perfectly in one simple act, the devouring of one of the fish of another in the aquarium display:


“Damn,” Mickey said, almost to himself. “The guy at the store said they could cohabit.”


That’s a theme that will continue. With the best of intention, none of the Batch family can quite manage to live with anyone else, at least not in a traditional way.


Kay may have set the chain of grifting off, by sending back goods to stores and firms in order to be paid back with bulk packages by way of apology, but it was only with the best of intentions. Given these beginnings, it’s no wonder that after a disastrous attempt by Billie to get to know her real father, she becomes hooked to a man (Dennis) who is always on the make. It’s also completely logical that the children of Billie and Dennis are practically left to bring themselves up. There’s a wonderful description of Dennis and his slippery ways that speaks volumes. It describes a rare day out:


‘One time Dennis even spent the entire day with them, shooting off rockets in a nearby park with the other scouts and their dads. Dennis even talked to the other fathers, laughing like it was all he ever wanted to do. Like he knew how to be a regular dad. Like he was the most regular dad of all. All the other dads congregated around them that day; Dennis was good at fooling everyone.’


In the end, we get to see one of those kids, Charlie, slowly come to terms with the world. He takes to spending time in the houses and apartments of others and enjoying the peace he finds there. He enjoys the art on the walls and the books on the shelves. Most of all, I suspect, he just likes to be in a place that works as a home.


The plot that is built around these characters is a treat, but I’m not going to spoil that for you. Abbott describes things beautifully. There’s a really strong sense of period and also a wonderfully handled subtlety to the changes brought by time. As each of the Batches faces difficulty, there’s always a sense of tension that centres upon the way things might play out. For me there was also a real warmth about all the family members, even when the twists and turns of their decisions and their actions seem dark and cold. Best of all, there’s a wonderfully gentle humour that keeps things bright no matter how hopeless things seem.


The end result is a delight. It deals with some serious and traumatic events in the lives of a folk who have always found themselves holding on to the dirty end of the stick, yet manages to visit these difficult places and situations in a way that is always palatable.


In truth, I was expecting more of a traditional crime novel. What I got was actually much better than that – a well-polished view of the flip-side of the American dream where the crime provides the backdrop for the telling of a wonderful story.