One Man's Opinion: THE BROOKLYN FOLLIES by PAUL AUSTER 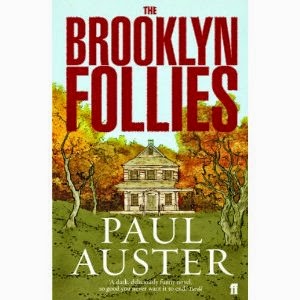 Brooklyn Follies is told by an older man, Nathan, whose cancer is in remission and who has decided to return to his Brooklyn home to see out his final years. While there, he sets out on the writing down of the follies of his life in order to pass the time.


The follies have led him to where he is, a lonely man who has managed to lose his family in one way or another; carelessness, boredom and chance have all played their part in this.


Life changes when he bumps into his nephew, Tom, in a bookstore. Tom is an ex-academic who has worked his way through taxi driving to find his new home. Philosophically, Tom wants to withdraw from the human world so that he can live life in a pure form as inspired by some of his literary heroes. It’s an idea that Nathan can understand and they spend time together discussing their love of ideas and literature and to work out where they should be heading.


They’re joined in this by Tom’s boss who turns out to be an art-fraudster and an ex-convict who has been living with a new identity to protect his interests.


The plot thickens when various other family members join the story, especially when Tom’s niece arrives to live with them having escaped her mother and step-father and sworn herself to silence.


The plot thickens and becomes more complex as the lives of the group are woven together. The resolutions are pleasing and satisfying and the book closes with a positive tone that offers a pleasing glow and a sense that there needs to be a little reflection done just at the point when all seemed done.


This is unlike most of the work I’ve read by Mr Auster. There’s a slightly different feel to the work than I’m used to and it took me a while to find my way. Often that difference relates to the tone and this is largely due to the voice of the character who tells the story. Some of the themes seemed familiar and there are definite trademarks in here. What I missed in the work, though, was the sense of rhythm and tone that I’ve tended to enjoy in his books as if the poetry and flare had been cut away. Follies has a lighter tone and seems to swim in shallower waters. It’s like an artist who works in fine detail has put down the small brushes for a while and decided that broad strokes can be just as powerful as tools.


I liked the story. Enjoyed the ups and downs of the lives as they bounce off each other and through their journeys.


If I understood the book, I’d say there’s something wonderful in its conclusions. There’s an acknowledgement of the hopelessness and futility of existence at its heart because that’s where we all are – doomed to die and to be forgotten. There’s also a delight in the breaking away from this truth in order to live. It’s not in the withdrawing from the world that one can find enrichment and happiness (or even failure and unhappiness), but it’s in the taking of decisions, the mistakes that are made, the people we grow close to and the warmth of those interactions that help us build our own epitaphs. It suggests a level playing field of sorts where acts of greatness are to be found everywhere. That we are all heroes at some point in life and at some time or other and this needs to be celebrated and understood to help make the most of our time here, for ourselves and those around us.


Auster tells a story of Kafka in the last year of his life as he tries to help a girl to overcome her distress at losing her favourite doll. To help her, he creates a story that allows her to come to terms with the loss, ‘for as long as the story goes on, reality no longer exists’. My take on this relates to that need to work on our own lives to hide away from that painful truth. That in the building of relationships and patterns we are creating stories of our own and that these stories are our salvation.


Even though I felt this novel lacked a little seasoning in some way – a little salt or pepper, perhaps - I did really enjoy it. Well worth a read and the time it will take to draw your own conclusions.
Posted by Nigel Bird at 10:24