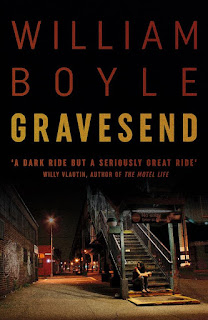 Gravesend is a stunning read. It takes an area of Brooklyn and makes it a central character in a novel that ignites the attention from the off.


The story swirls around an incident from years earlier like a whirlpool of water preparing to disappear down the plughole. The incident in question is the killing of a young, gay man (Duncan) who was lured down to the beach for some action by a gang of thugs and bullies.


Daniel’s death has touched so many lives. Most importantly it has wrecked his brother, Conway, and shattered his father.


Things come to a head when Ray Boy, the leader of the thugs, is released from prison. This forces Conway’s hand as Conway has been planning to kill Ray Boy from the off. The only problem is the Ray Boy that Conway meets isn’t the one he hates. In a cruel twist, Ray Boy’s tattoos tell Conway of his enlightenment and this changes everything. In some ways, Ray Boy’s change also had a big impact on me as a reader, the villain coming as close to being a hero as anyone else in the book. This dynamic simply adds to the energy and the tension of the read.


Conway’s on the skids. He takes a day off to lick wounds and drink himself safe. He considers his failures: ‘It wasn’t even noon. On a Monday. Pretty much every self-respecting person was out in the world working. Hauling trash, conducting trains, butchering meat, fighting fires, teaching, doing construction, whatever. And here they were. Fucked. People to pity. Not even noon on a fucking Monday. No wonder the Irish girl gave them that Spaghetti Western death stare.’


Ray Boy’s change isn’t lost on his nephew, Eugene, now a feisty teenager who wants to claim a reputation like his uncle’s as his own. Eugene is devastated by the changes in the man who has returned from prison and sets up a plan that might just bring the old Ray Boy back.


There’s a whole chapter dedicated to the things Eugene hates about life. On the surface, this may seem a little negative, but it’s full of contrasting shades that it gives an incredibly detailed sense of who he is – by focusing on the darkness, it draws attention to the light and to just about everything else. It’s a fantastic piece of prose.


Allessandra is another of Gravesend’s lost souls. She’s back to live with her father after missing her mother’s last days. She’s been out in LA and is struggling to find her way in an area of town that lacks the sophistication she’s become used to. Allessandra was one of Conway’s crushes back in the day and she also happens to develop a thing for Ray Boy and his good looking, easy action. There’s a short passage that I loved in which Allesandra considers giving in to the booze. In doing so, she describes some the people of her town: ‘Drink every day at The Wrong Number. Say to hell with work. Become one of these neighbourhood ghosts, old alkies in wrinkled black clothes that just skeleton around on feet like broken shopping cart wheels. When it got real bad, she could just dig in trash bins for bottles like the old Chinese, haul them down to Waldbaum’s for drinking money, live in this house until her father died and they took it away from her and then she could go to a home, the one over on Cropsey, where she’d wear Salvation Army clothes and lose her hair and teeth in the sink. An actress? Forget it. Once maybe, in another city, another time. Just wispy bones and yellowing skin now. The old boozer that kids throw rocks at for kicks.’


The characters in the story are perfectly linked. They live in a world where ‘everything’s some kind of sad’ and do their best to stay afloat. Thing is, we know from the off that there isn’t room for everyone on the raft and that someone’s going to go under, we just don’t know who’s going to end up where.


I really loved this book. By focussing on the one area and the people brought together by the one incident, Boyle manages to talk about the whole of the human condition. There are beautifully constructed descriptions, not least when dealing with the introspections of the characters. Boyle allows the reader to get inside the minds of all who inhabit the tale and this is wonderfully handled. The stark writing style allows for a ‘warts and all’ description of a gritty environment as well as a poetic sense of the wonder and fragility of the world.


Top marks at every level. A must read from a real heavyweight.
Posted by Nigel Bird at 11:57