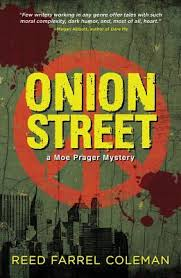 I like the idea of a prequel when it relates to something I really enjoy. Private Investigators certainly come into that category. The next book on my list is ‘A Drop Of The Hard Stuff’, where I hope I’m going to find out a little more about one of my favourite characters, Lawrence Block’s creation Matt Scudder.


This time around it was another New York detective, Moe Prager, who I was getting to know better. As well as the similarities between Prager and Scudder, there are also big differences. Prager is from Brooklyn and he’s Jewish, which are 2 aspects of his being that make him very distinctive.


In ‘Onion Street’, Prager sits with his daughter and tells her about how he became a cop.


We know early on that it has something to do with his best friend in college, Bobby Friedman, and that there’s going to be plenty to tell.  In part, his thought processes relate to ‘what might have been’ if life hadn’t followed the path it did.


Bobby Friedman is the son of a radical, communist, immigrant family. He’s the exception among a college crowd who have been politicised by America’s role in Vietnam and the possibility that they might be drafted in that he’s very much into free enterprise, dabbling here and there in anything that will make him money.


On the night that Moe bails Bobby out of jail (due to suspicions about the death his girlfriend), Moe finds his own girlfriend (Mindy) in a terrible state. The only things he can get from her are sex and a warning to stay away from Bobby.


The next day, a car attempts to kill Bobby and it’s a good job for him that Moe has ignored Mindy’s warning.


Before Moe can get to the bottom of things, he finds out that Mindy is in a coma having been attacked in the street.


The warning she gave him and the unusual string of events leave Moe desperate to find Mindy’s attacker and also to find out the truth.


As he investigates, he becomes entwined in business that is extremely dangerous. People around him seem to get hurt or killed as he follows his instincts and each open door leads him into a darker and more sinister corridor. It’s not long before his own life is in jeopardy and he has to rely on his street-smarts to help him get through his speedy transition to adulthood. Unfortunately for him, his street-smarts aren’t quite what he thought they were:


“You grow up in Brooklyn, you like to think you’re tough, that your skin is thick and concrete hard and that you come out of the womb all grown up and prepared for anything life can through at you; [but] I wasn’t any tougher or any more prepared for the darts life throws at you than a Kansas farm boy.”


Getting to know Moe in his early years is often a treat. He’s feeling his way the best way he can and his decisions aren’t always as sensible as his older self might make. This does create a slight difficulty for author and reader in that young Moe needs to go through long thinking processes from time to time, and this sometimes has a circular feel to it.  It does also lead to several incidents where the reader seems well ahead of the would-be detective. That said, we’re not in the hands of the protagonist but in the care of a skilled author and the way the labyrinth has been built and then navigated keeps things moving along pretty nicely.


As the plot twists and turns, any sense that there might be a predictable ending to the book has gone and all bets on working what might happen are off.  What I can tell you is that Moe sticks to the task admirably and it’s clear that he’s a natural.


There’s a lot to enjoy here. I love the little Jewish asides which are inserted to add a strong flavour to the piece. I also really like the sense of Brooklyn and what it might have been in 1967 and it does feel like it is a crucial element to both this story and to Moe’s future. It’s also fascinating seeing a young man start off on his journey into police and detective work, especially when this path emerges so organically from circumstance.


It’s a book that many Moe fans will enjoy. It’s also one that newcomers might find interesting and, in case they don’t already know, there’s a lot to come if they become hooked.  Onion Street may not be my favourite Moe Prager investigation, but I'm more than glad I joined him on this journey.
Posted by Nigel Bird at 20:00