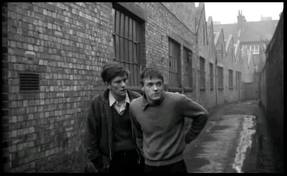 “What the hell is Brit Grit?” Paul D. Brazill posed this question last fall in order to present a long roster of high-quality British crime fiction writers who are active today. He’d published the piece a couple of times before, including this version in 2011 with “an addendum of worthy Brit Grit authors” – among them our host, Nigel Bird.

Paul wrote, “The godfathers of the new Brit Grit could well be Ted Lewis, Derek Raymond and Mark Timlin.” These were all new names to me, but upon investigation, a hunch of mine turned out to be accurate. After reading Nigel’s In Loco Parentis last year, I considered him to be an heir to a British literary tradition: the works of Alan Sillitoe, John Braine, and others from the late 1950s and early ’60s. Indeed, there’s a clear line that runs from those so-called “Angry Young Men” down to the current generation, through Lewis in particular.

Another author in Paul’s list, David Peace, helped connect the dots. Peace, who grew up in , talked to Matthew Hart for the 2006 work Immigrant Fictions. He said, “To read John Braine, Stan Barstow, David Storey, Alan Sillitoe, and Barry Hines, and later Ted Lewis and Derek Raymond, was very empowering and inspiring for me – reading about places I knew in language I heard and spoke every day.”

The bleak backdrop of industrial was essential to the grittiness of those works from that decade or so before “Swinging London” came into vogue in the mid-1960s. It’s also a prime element in much of today’s Brit Grit. And even though crime wasn’t the focus of the earlier authors, it’s an undercurrent, most visible in the borstal boy anti-hero of Sillitoe’s The Loneliness of the Long Distance Runner.

Sillitoe himself acknowledged this in the final interview he gave before his death in 2010. The interviewer noted, “A lot of your characters escape the humdrum of their lives through petty crime or heavy drinking. Presently, has a bad reputation for both, not to mention gun crime. Do you think your stories have contributed to this myth?” Sillitoe replied, “I don’t know really. I mean this type of crime you get now is nothing like the kind of crime the people I knew when growing up would ever perpetrate. We wouldn’t dare. I wrote before the druggy era…”

Yet despite this crucial difference, Sillitoe et al. paved the way for decades to come. Two more Brit Grit authors of the 2000s, Cathi Unsworth and Martyn Waites, showed just how strong the connection was in this interview they did with each other. “Cookie” – as they referred to Robin Cook, for whom Derek Raymond was a pen name – was an enormous influence on both. He was personally responsible for making a crime fiction writer of Unsworth, who asked Waites in turn about the impact of Cook, as well as Northern writers such as Sillitoe, , Keith Waterhouse, and Lewis.

Waites underscored Cook’s importance, though in contrast to Peace, he said that he came to the others retroactively. He also said, “It’s interesting you touched on Sillitoe, et al., because they’re writers who are noted for creating fiction that examines society from the bottom up. And that’s the way I think crime fiction – at least good crime fiction – is headed.” He also added, “I think place is vitally important” – Waites focuses on Northern settings – and noted strong echoes of where and how Lewis worked in his own writing.

Cook/Raymond was an upper-class Londoner who came to know and write about that city’s underbelly. Mark Timlin, another Southerner writing about , took his primary influences from American noir fiction. There’s little evidence of any direct imprint on either from the “Angry Young Men.”

There’s no doubt, though, of the ties between Lewis and Sillitoe, Braine, Storey and Co. Brian Greene, who has written a number of articles about Lewis, discussed the Northerner’s shift between the crime genre and “literary” works. Lewis made his reputation with Jack’s Return Home, the basis for the highly influential film Get Carter. Yet “Lewis returned to the literary fiction milieu with 1975’s The Rabbit, a coming-of-age novel…done in the vein of gritty Brit kitchen sink dramas like Saturday Night and Sunday Morning, Room at the Top, This Sporting Life, The Loneliness of the Long Distance Runner, etc.”

In another piece, Greene noted that Lewis’s first novel (an unsuccessful 1965 effort called All the Way Home and All the Night Through), was also written in the “Angry Young Men” vein. Of particular interest in that article, however, was Lewis’s passion for the cinema. Here too the influence of the “kitchen sink dramas” is visible – this was one of the finest periods ever for British film. Directors such as Tony Richardson, Karel Reisz, and Lindsay Anderson translated the literature brilliantly to the screen. In fact, in a 1999 article, journalist Vanessa Thorpe wrote about a revival of “the hard-bitten tradition of social realism…launched on the back of pictures such as Saturday Night and Sunday Morning, A Kind of Loving, and This Sporting Life.” The term she used? “Brit-grit.”
Posted by Nigel Bird at 10:57