One Man's Opinion: A FEAST OF SNAKES by HARRY CREWS 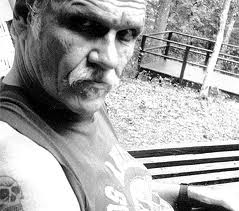 First off, a big thanks to Rory Costello for yesterday's piece.  If you didn't see it, I recommend that you scroll down and check it out. I'd also thank Rory for suggesting this book to me as something I might enjoy; as always, he was bang on the money.
A Feast Of Snakes is a stunning novel.


It’s set in Mystic, Georgia during the build up to a Rattlesnake Roundup that’s become a little too successful for the small town to handle.


Joe Lon Mackey is an ex-football player whose career is over at a young age. To take the edge off his sense of failure he’s turned to the bottle and still tries to maintain his top-dog status in the area.


He has a hard-nosed father (Big Joe Lon) who has a talent for dog-fighting, a damaged sister who stays in bed all day watching TV, a sheriff friend who likes to play with young girls, a saintly wife and two children and a hot lust for an ex-girlfriend who has returned to Mystic from college.


The opening at a football game is full of energy – sexual, violent and disturbing – and pregnant with the bizarre. It’s clear from the off that this book is going to be out of the ordinary and that understanding is powerfully underlined as it continues.


There are some very strong elements that a reader can hold on to. There’s the subtle depiction of racial relations and the way people work within the boundaries of time and place. There’s an existential slant to the examination of purpose and the implications of losing direction whether that be through age or accident. There’s a view of the power within relationships on a small and larger scale and that damage that can be done when power is the only tool one has in the box. There are thoughts on madness and the thin ice that we all tread upon. We also get to see the extremes of complete control and absolute anarchy and the dangers of each extreme.


The plot is a gently meandering one is some ways. I read the book slowly even though there was a page-turning element to the writing that might have had me jumping on to find out what was about to happen. Taking my time seemed important as there’s so much to savour. In tone the words and the dialogue seem simple, yet there’s a wonderful subtlety to it all that means it might be better not to miss the gems on each page by rushing.


I was really struck by the parallels between the old dogs coming to the end of their fighting lives and Joe Lon. They’ve all been bullied by Big Joe in ways that no creature should be. It might be that Big Joe feels this is the right thing to do, but his clarity is hugely misguided. The fates of the dogs and the son are sealed and have been for a long time; it’s a shame none of them had other strings to their bows.


The dog fighting and training scenes are fully developed and hard-hitting. They’re gritty as they could be. I’m pleased I only read this after writing ‘Smoke’ otherwise I may not have felt up to the job.


There are also a couple of scenes and situations of bullying that are so profound as to be hugely disturbing. What Crews does here is rather special. Instead of laying the violence and the harshness of the acts of cruelty bare with no supporting frame, he manages to bring out a huge empathy with the victims. Whether it’s Lottie Mae suffering under the sheriff’s weight or Joe’s wife putting up with the most humiliating treatment or the retired salesmen who runs into the wrong people at the wrong time, they’re all flinchingly well-written.


The book really struts to its conclusion and feels like it has put on many pounds of muscle along the way. By the end it has the strength of a powerful beast and, like Goliath, there’s only one way for the beast to go.


There’s a line early on from cheerleader Hard Candy as she feeds a rat to a snake that puts me in mind of what Crews can do to a reader: ‘Nobody’s going to hurt you, little rat. We just gone let the snake kill you a little.’ Be warned.


This was my second read of a Harry Crews story. The first time around, I really didn’t manage to get beyond the beauty of some of the prose. A Feast Of Snakes is something else altogether and now, at last, I can see why the author is so widely hailed as a talent and a huge influence upon more contemporary writing.