One Man's Opinion: THE SOUND OF LONELINESS by CRAIG WALLWORK 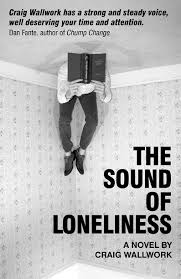 The words of William Blake are quoted at the beginning of this novel:


‘Dear mother, Dear mother, the Church is cold, but the Alehouse is healthy, and pleasant, and warm.’


It doesn’t take long to work out that this opening is very apt.


Daniel Crabtree is a barfly of sorts – more of a pubfly really.  The pubs he frequents don’t have any of the dramatic or romantic connotations that one often finds in American fiction, rather they are down to earth places where men hide out and hang out and do little of interest other than drink.


Crabtree is a writer.  He’s written one story – a short story which isn’t good enough to get into his local rag.  Fortunately, he has only a loathing for those who can’t see his genius and is convinced of his abilities as an author and imagines his future to involve literary awards and high praise.


In order to help his prospects, he moves out of his family home to live a life where a living is barely scraped together.  Hunger, he thinks, will be the carriage of his muse.


The thing about Crabtree is that he has a point in regard to his own talents.  When telling his own life story or having to invent tales on the spot to get out of tight spots he has a real ability to entertain.  The detail into which he goes is often a little further than one might want him to , but he relates events with a curious and honest perception as well as with a wonderful sense of dry humour.


He is full of tales about his drinking, illnesses, his tricks for making sure his benefits aren’t stopped, his miserable living conditions, his encounters with women, fellow drinkers and his description of Salford and they are all superb.  Episodes with his dying uncle had me laughing out loud and drawing unwanted attention on the train and there were many instances where I couldn’t believe that the words used had actually been written down (these are brave words completely unshackled by Politically Correctness, words which sometimes seem chosen to stick up two fingers at aspects of modern Britain).


It strikes me as appropriate that this was the book I was reading at the time of Margaret Thatcher’s death given that the novel is set in a post-Thatcherite world where there was a lot of polarisation in many different ways.


There was a time when I thought I’d celebrate the Iron Lady’s passing.  Thought I’d put on Costello’s ‘TrampThe Dirt Down’ and dance on an imagined grave.  Having lost my own mother last year, I can’t find it in me to feel good about it – I guess I’m getting old – but there’s a little happy bubble inside that I’m suppressing just now and it’s an act of suppression that Crabteree  just wouldn’t understand.


The snapshot that Wallwork offers of an ‘it’s grim up north (and in lots of other places)’ Manchester pre-regeneration is clear and crisp.  It certainly took me back.  I’d like to think that one of Thatcher’s legacies was to set in motion voices of protest and a whole gang of reactionaries who turned to creative outlets and ended up presenting us with such fine works as this.