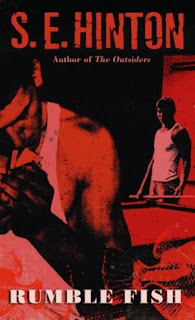 Things in life don’t come with equal weight. The biggest and heaviest impacts are when an event or a moment grab a life that is completely and utterly ripe for something it didn’t know existed.

The film Rumble Fish was one of the big blows of my early adulthood. To me it was (and still is) mind-blowingly good. The cast, the themes, the black-and-white and The Motorcycle Boy, Tom Waits raising his middle finger and chewing gum and an ending capable of knocking out a cinema full in the one go.

What I didn’t realise at the time was how much it had stayed true to the book.

I honestly don’t know why I didn’t think of reading it earlier.  As with The Outsiders, I think it had something to do with the Young Adult tag; even though that’s what I was at the first viewing of each film (Rumblefish at the Scala cinema in London’s King’s Cross and The Outsiders on video in my family home).

Wasted years, I can tell you.

The first thing that struck me about Rumble Fish (the book) was the power of the opening chapter.  It’s nigh-on perfect I’d say. Sets the scene, hooks the reader, gives the voice and explodes into action in a way that’s laid back and almost lazy – I know that laid-back and explode contradict each other, but that’s how it feels – I guess that a slick car with great gears and engine might do this as it accelerates, fast as hell yet so smooth the motion is hardly felt.

After reading those first few pages, I had to pause for a couple of days just to think about it.

The next thing that hit was the way that the movie of the book had stuck so closely to the dialogue (it’s practically verbatim). I loved reading lines that I’ve been carrying around with me for years:

“Even the most primitive societies have an innate respect for the insane.”

“Loyalty is his only vice.”

“The Greeks got her.”

“California is like a beautiful wild kid on heroin, high as a kite and thinking she’s on top of the world, not knowing she’s dying, not believing it even if you show her the marks.”

Winners all.  And there are so many more.

The story itself is brilliant.  It’s everything I want from a book. The characters are so well drawn and the setting and the plot are great. It holds an incredible romance for me, a nostalgia for something I didn’t really experience, the kind of nostalgia I felt with books like The Great Gatsby and the like.

I love the idea of people being born in the wrong age (I swear I know a few of those) or in the wrong place (ditto).  The sense of heroes and idolisation reminds me of my own idols. The relationships are dysfunctional in a way that’s almost caricature but maintain love at their core. Time flies, life is short, people are different, we have dreams and nightmares, we’re all products of our genetic mix and our realities.

As far as I know, this book is studied still as a modern classic in the US.  I can see why that is – if I ever write anything as good, I’ll have achieved all I ever wanted to with my work.

I can also see why this might attract the odd detractor.
Too simple they might say. Too unreal.  Too pretentious. Too whatever they feel it’s too much of.  Whatever it is, they might be right, but then again, maybe they just didn’t read it at the right moment or in the right place.

To me, it’s just brilliant.

And I still want to be The Motorcycle Boy even though I get nervous as a passenger on a scooter as soon as it racks up 30 miles per.