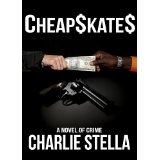 I’ve been through a period of grieving these last
couple of months and it hasn’t been easy.


One thing that was radically affected was my ability
to concentrate upon any fiction longer than around a
thousand words.


What I needed to conquer the reader’s block was a
book that would grab me from the start, would work
as a page-turner, had sharply drawn characters and
kept a really high standard of quality writing.


I tried 3 or 4 before finding my solution and in the
end it was Charlie Stella’s Cheapskates that whisked
me back to reader heaven.


I’m grateful to Mr Stella for that.


‘Cheapskates’ is a fantastic read.


Early on, the book visits a prison cell where a couple of inmates of very different personalities are housed just before their release.  The thing they have in common is a strong sense of justice and a need to see the right thing done.


For one of those inmates, Peter Rizzo, he’s all set to retrieve money from his ex-wife who owes him 50k plus interest.


Cellmate Reese Waters is a placid man, a drummer and a reader and something of a sage.  He’s done his best to talk Rizzo after going after the cash and has persuaded his friend to allow him to act as a go-between in order to save Rizzo from a parole violation.


When the pair get out from Fishkill and go their separate ways, they agree to meet up and work things out.


Reese goes along to meet Rizzo’s ex as planned.  She’s as much of a cheapskate as he’s been told and he takes an instant dislike for her when she gives him the brush-off.


What Reese doesn’t know at that point is that the ex has had Rizzo bumped off, using connections to the mob via her lover Jimmy Valentine.


From then on the plot gathers apace and really thickens.


Reese needs to see justice done.  The cops get involved, the mob do what they can to tie up loose ends before they’re indicted for one thing or another, there’s a drunken bus driver, a mean old man who eats discount cakes all week for lunch, there’s a radical Muslim brotherhood offering muscle, a discredited officer from the organised –crime squad and there are solicitors with hearts and without.


It’s a tangled web they all weave and it’s clear from the beginning that some of them are going to get caught up by their own dealings.  What’s not so clear is who that’s going to be.


Stella works the plot like a master plate spinner.  The points of view change at regular intervals and this is managed with immense skill.  The plot thickens at every turn and the twists make this interesting from start to finish.


I loved many things about Cheapskates.


Firstly, the characters are diverse and very-well defined.  They come from different backgrounds entirely and Stella uses the differences in ways that play with stereotype as much as they buck the obvious to find the unique.  What this allows is for changing the angle of story-telling with ease as the people involved are immediately recognisable.


Next there is the mob background.  I can’t help it, I’m a sucker for a good gangster tale.   What makes it all the better is that it feels like Stella has been there and lived the life.  It has a real authenticity to it all that you won’t often find in fiction.


There’s the dialogue.  It’s a pleasure all on its own.


And there’s the humour.  Amidst all of the serious plays is a really dry comedy that provided another dimension.  I like to laugh and I laughed a lot – with people like the ones on these pages, it would be difficult to keep a straight face.


The overall work is a piece of class.  If the book was in the mafia it would be the Godfather.  And you’d better believe that, believe me.