The Next Big Thing - Nigel Bird 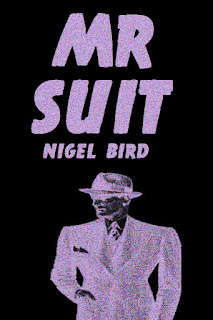 I'm on a chain-gang.  The bracelets are killing me and I'm parched.

My tag came from Daniel O'Shea over at his blog Going Ballistic.  He's done a great interview over there and now it's my turn to give the questions a try.

At the end of the piece, I'll link to the folk I've tagged so you can find out about their great stuff as soon as they've been roped in, branded and put theirs up.

Thanks to Dan for the tag.  Now, here goes:


1 What is the working title of your next book?

Because I've only just put out Mr Suit (US), I'm going to refer to that as my 'next book' because I've not had time to think of a new story yet.

2. Where did the idea for the book come from?

I was moved by the court-cases here in the UK by people with great physical difficulties who wanted to have the right to die – a man with locked-in syndrome was so incapacitated that he couldn’t take his own life and his close family couldn’t end things without being charged with murder.  It seemed crazy and I wanted to write a serious novel on the subject.


As research, I read The Diving Bell And The Butterfly and also a brilliant novel called Senseless (by Stona Fitch).  They were so good, I needed to find another approach, hence Mr Suit.


3 What genre does your book fall under?


4   What actors would you choose to play the part of your characters in a movie rendition?

I’d have a man with locked-in syndrome for the role of Archie just to get it right. His wife might be Joan Crawford and Mr Suit would be Broderick Crawford (I figure that’s OK because them being dead already doesn’t make the prospect of the film being made any less likely).

Ritchie, Tarantino and Capra can collaborate on production and direction.


5)   What is the one-sentence synopsis of your book?


When a plan for a gangland euthanasia party goes wrong, someone’s bound to end up sleeping with the fishes.

6)   Will your book be self-published or represented by an agency?


It’s self-published as an e-book and a paperback.


7)   How long did it take you to write the first draft of the manuscript?

Though it’s only a novella, I spent a long time on the first draft.  A good couple of months fine tuning.


Unusually for me, when it came to the edit I ended up adding words rather than taking them away to try and give this one a slightly different feel than my usual work.

What other books would you compare this story to within your genre?


9   Who or what inspired you to write this book?

What else about the book might pique the reader's interest?


It’s unpredictable – I doubt the twists can be fathomed in advance of coming across them.

It features the slowest getaway vehicle in the history of crime fiction.

There’s a little sex to add some spice it that’s your boat.


The humour runs through it from start to finish, so if you’re a fan of dark comedy it might well be for you.


Now for my first tag.

Drum roll.  I mean McDroll.  She's funny and Scottish (you might have guessed), she's lovely (which you possibly know) and she writes great stories (should you not know that, maybe it's time to find out).