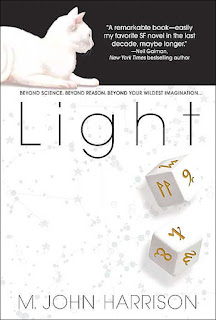 Light (US) is a little different from my usual read, but it came to me highly recommended by a trusted friend and so I went for it.


Essentially, it’s the science-fiction aspect of the book that is my uncharted territory, not that I needed to have worried.  M John Harrison has produced a work that is highly engaging throughout and suffuses high drama and tension into an intricate plot that is populated by tremendous characters.


The story is told in three strands which occasionally overlap and eventually come together.


There’s Michael Kearney, a scientist on the verge of a breakthrough of immense proportions.  He’s an Oxbridge graduate who’s a bit of a loafer and who relies upon his partner to do most of the research in the messy lab.  He’s obsessed by a creature called the Shrander which appears to be chasing him.  He also has a rather interesting relationship with women – mostly he kills them as a sacrifice to keep him safe, but he never quite manages to get round to ditching his ex-wife.  There’s a wonderful moment when, after a few days in bed together, Kearney decides he need to work and says goodbye to that ex-wife.  “I knew you’d go out again,” she tells him.  In that phrase I think you get to see some of the author’s talent.  It encapsulates so much about their relationship and her character (and indeed that moment that many lovers may experience when they’ve wrapped themselves in a perfectly safe bubble for a while).  Lovely and heartbreaking and apparently simply crafted.


The next strand of the story follows a burned-out space pilot who is addicted to spending time in ‘The Tanks’.  When inside the tank, the world is one of imagination and dreams.  It’s full of an amniotic fluid that bathes the subject and keeps them alive.  When the money in the machine runs out, the subject is prepared for release with tranquilisers and hormones to help with the withdrawal as reality kicks back in.  Ed Chianese loves the tanks.  Unfortunately, not everyone loves Ed.  He’s being chased by the imposing, frightening and heartless Cray sisters who are prepared to pretty much anything to get the guy.  Ed’s only chance is to fight them and run and from the point of his flight, his world becomes an exciting and eventful place to be.


The third aspect of the story is about a human who has been through a process of becoming a space-craft.  She’s part consciousness, part machine.  She’s on a mission to get her existence sorted out.  Unbeknown to her, the man she turns to for help (Uncle Zip) ends up setting her up so that he can follow her and reach his own goal and this is an engrossing journey in itself.


I need to admit that some of the aspects of the imagination had me bamboozled – the nature of travel, the K-Tract, the morphing and genetic interference and such.  Luckily, though, I don’t think that spoiled my enjoyment at all.
There are bizarre sex scenes, there's crazy fashion, there's shape-shifing and there's a gentle sense of parody from time-to-time.
The plot is driven by the needs and desires of the characters.  The settings are wonderfully described.  The questions posed are challenging and fun to consider and the image of the future seems to be neither welcoming of frightening, more just the way things turn out.


Well worth the investment of time and money this one.  Check it out.  It's just been brought out on kindle, too.