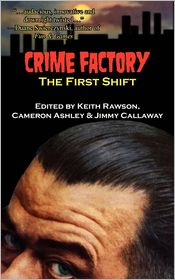 
Andrew: Thanks, nice to be here. And thanks to Nigel Bird for hosting us.


Andrew: Not going to start off with a witty joke about the weirdness of this interviewing your self-gig?


Andrew: Okay, let’s cut to the chase, you’re another bloody would be crime writer, yeah?


Andrew: What led to this?


Andrew: I worked as a journalist for several years in Asia in the mid-nineties, Laos, Vietnam, Cambodia and Thailand, and since then in various research positions in the community sector and trade union movement. All these jobs involved writing but I always wanted to write crime fiction. So, in late 2007, I quite my job and moved to Phnom Penh for a year with my partner and then two-year old daughter. I free-lanced as a journalist and television fixer and wrote the first draft of a crime novel set in Cambodia.


Andrew: So, don’t keep us in suspense, give us the pitch.


Andrew: 1996, the long-running Khmer Rouge insurgency is fragmenting, competing factions of an unstable coalition government scrambling to gain the upper hand. Missing in the chaos is businessman Charles Avery. Hired to find him is Vietnamese Australian ex-cop Max Quinlan. But Avery has made dangerous enemies and Quinlan is not the only one looking. Teaming up with Heng Sarin, a local journalist, Quinlan’s search takes him from the freewheeling capital Phnom Penh to the battle scarred western borderlands. As the political temperature soars, he is slowly drawn into a mystery that plunges him into the heart of Cambodia’s bloody past.


Andrew: I’ve been fascinated with Cambodia ever since I first visited in 1992: the history, the people, the contrast between the wild-west atmosphere of Phnom Penh and the rough but incredibly beautiful countryside. Things happen there that you couldn’t make up if you tried. I always thought Cambodia would be an excellent setting for a crime novel. But I also wanted to capture the broken country that was Cambodia in the nineties, to write about those people trapped in the cracks between two periods of history, the choices they made and what they did to survive.


Andrew: Has the manuscript been picked up yet?


Andrew: No. It’s been shortlisted for a couple of awards, including the 2010 Victorian Premier’s Literary Awards in the category of ‘Unpublished Manuscript by an Emerging Victorian Writer’, and is currently doing the rounds of the local publishers.


The feedback’s been good but no bites yet. Hopefully, it’ll get picked up eventually.


Andrew: Okay, let’s back up a bit. Why crime fiction?


Andrew: I’ve always read a lot of crime fiction, particularly darker, more hard-boiled fiction. I was never interested writing in any other genre, simple as that.


Andrew: What instilled this love of crime fiction in you?


Andrew: My late father. Along with a lot of men in the fifties and sixties, Dad loved his crime novels. He had a thing for Carter Brown, Mickey Spillane, John MacDonald and Ian Fleming. As the seventies progressed, Dad got into popular thrillers by Alistair Maclean and Wilbur Smith. Even as a child, I remember being fascinated by Dad’s collection of crime paperbacks. Their lurid cover art, the seamy cadence of titles like Nobody Loves a Loser and Bid the Babe Bye-Bye. I suppose his reading habits just rubbed off on me.

Andrew: Give us a taste of the Australian crime-writing scene.


Andrew: There’s certainly some great Australian crime fiction. For example, Peter Corris, who singlehandedly reinvigorated the Australian PI novel after the local pulp paperback industry died in the early seventies. I love Garry Disher, whose Wyatt books are a local version of Stark’s Parker books, as well as Leigh Redhead and Malla Nunn. A great book that came out last year is Line of Sight by West Australian David Whish Wilson. If you want to read a solid piece of dark, hard-boiled Aussie crime fiction, check it out.


That said, I think our publishing industry generally is pretty narrowly focused, including crime fiction. The filter manuscripts have to pass through is fairly small. As a result, we get a lot of cosies, police procedurals, forensic analyst characters and real crime. There doesn’t seem to be a lot of space for darker, more innovative stories.


Andrew: Who is to say it’s not just sour grapes on your part because you haven’t managed to get your manuscript published yet?


Andrew: That’s a fair call. As I said above, there are some great local crime writers. My hometown of Melbourne also has boasts a very active literary scene, a lot of great bookshops and literary festivals, of which the annual Emerging Writers Festival is one of my favourites.


But the reality is due to size and other factors, Australia has a very small cultural industry and as a consequence, a small memory making machine, so to speak. For example, we are only just now starting to see the emergence of smaller niche publishers focusing on crime or with crime as one of a several genres they specialize in. We are way behind the US and, I suspect, the UK, in that regard. I can’t help but think one of the reasons this has not yet happened here is the absence of the vibrant network of crime fiction web zines and blogs. I really believe the two go together.


Andrew: I believe you are involved in one of these on line ventures?


Andrew: I’m one of the editors at Crime Factory. I enjoy it immensely. It’s also been great to become friends with the other Australian editors, Cameron Ashley and Liam Jose. They are great guys and have really opened my eyes to the international hard-boiled and noir crime-writing scene.


In the US, Crime Factory and other on-line crime magazines are seen as prestigious forums for emerging and established crime writers to place short fiction, and they’re are often read by literary agents and publishing houses. The contrast with Australia, where we are relatively unknown, fascinates me. Just trying to get local writers to submit short crime fiction for the magazine has been a tough sell. Hopefully, that’s something we are going to change in the coming months.


Andrew: Do you blog?


Andrew: Mate, does a bear shit in the woods?
My blog, Pulp Curry explores crime fiction and film from Asia and Australia.  You can check it out at www.pulpcurry.com I started it to publicise my writing, but it weems to have taken on a life of its own.  I love working on it, but if I'm not careful it takes up a lot of time I should otherwise be spending on long-term, more substantial projects.

Andrew: What else have are you been up to?


Andrew: I’ve been getting into short fiction. I really enjoy the challenge of the short story format. It’s also stops me obsessing about my manuscript.


I have a piece in Crime Factory: The FirstShift by indie US crime publisher New Pulp Press. I also have a story appearing in an upcoming anthology, TheOne That Got Away, by a new local publisher house called Dark Prints Press, which specialises in crime and horror. Fingers crossed, I’ll have a few other stories around the place in the coming months. By the way, if anyone’s got an anthology on the boil and wants to include an original, gritty Australian voice, I’m your man. Drop me a line via my blog.


Andrew: What about another book?


Andrew: Yeah, I’ve got a few ideas on the go. I have a couple of sequels to Quinlan book up my sleeve, including another story in Cambodia and one in Vietnam. I’ve also been plotting a novel based on the character that is in the Crime Factory and Dark Prints Press anthologies, an ex-Australian serviceman turned criminal called Gary Chance. Now, if I could just find a way not to have to work full time I’d have the time to do all this.


Andrew: Dream on, sunshine, dream on.


Andrew: That’s precisely what I plan to do.
Sea Minor loves those last lines.  Dream on all of us, dream on.

Many thanks, Andrew.
Other news.
I'm very excited about news just in that I'll have my novella 'SMOKE' published soon by the ever-growing and rather amazing Trestle Press.
Excited, too, about the new cover, which looks like this: 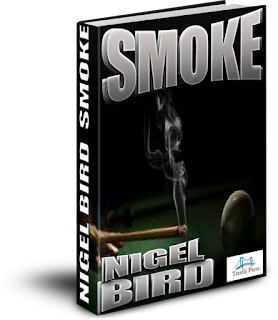 I really like it and hope that you do to (at the risk of sounding like the Rolling Stones).

I'm also pretty amazed still to have my Untreed Reads story Into Thin Air up there at number 3 in the Waterstones ebook > short stories chart.  Who knew?

Thanks for being here and have a great weekend everyone.