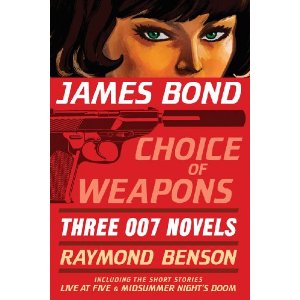 Hello to everyone out there in cyberspace. My name is Raymond Benson and I’ve been asked to interview myself. Since other authors before me have gone all cute and made jokes about this concept, I’m not going to attempt to follow suit. Thus, herewith is a series of questions and answers that are in no way silly, preposterous, or irrelevant to my life in the arts.


A: You said you weren’t going to be silly. I’m not going to answer that. And don’t call me Mr. Benson. That was my dad. And don’t call me “Ray.” I hate being called “Ray.” People who don’t know me well come up to me and, trying to be friendly, say, “Hello, Ray.” Ray Benson is the guy in the band Asleep at the Wheel. During the 1970s, I lived in Austin, Texas, where that band resides. I used to get Ray Benson’s phone calls and sometimes his mail. When I moved to New York City in 1979, the phone calls and mail followed me. One time I got a royalty check for one of his songs, it was for radio play in Israel or somewhere. The total was $9.05. So I cashed it. Years later I told Ray Benson about that and promised to buy him a couple of beers. He said to forget it.


2. So, Ray, I understand you’ve had at least three careers in the arts. Tell us about them.


A: It’s Raymond. And, yes, my career has been all over the map. My college degree is in theatre—stage directing, to be exact (we were allowed to declare an emphasis such as acting, directing, design, whatever)—so in my early twenties I embarked on that rough road. After a year-long stint as an Apprentice Director at the Alley Theatre in Houston, Texas, I moved to New York to conquer the Off-Broadway and Off-Off-Broadway (and Off-Off-Off-Off-Broadway) scene. At the same time, I was also a proficient pianist and composer. During my years at college, I often collaborated with playwrights by putting music to their lyrics and creating a few musicals. So I had a two-prong thrust into that world—as a director and as a composer. For several years I actually did direct plays and musicals, and compose music for other folks’ works. I received some ASCAP “awards.” The musical I wrote with playwright Frank Gagliano, The Resurrection of Jackie Cramer, was produced no less than six times around the country—including three times in New York. And while I was doing theatre, I worked a day job as a financial services “associate,” which was the fancy title for being a secretary. I was and still am a fast typist. Back before personal computers, my typing ability was a guaranteed entry into a temp job.


3. Okay, that’s two careers, or is it three? Directing, composing, and typing. What happened next?


A: What happened next was that I finally realized there was no money in theatre... so I became a writer [insert drum rim shot here]


A: Longer than most. There *are* a few living writers out there who were publishing stuff before me, but it seems as if everyone at the writers’ conferences I attend are younger than I am. I guess my longevity helps explain why I have over twenty-five published books, nearly ten computer games, a couple of plays, and a handful of musicals listed in my bibliography. Was that a question?


5. No, but we’ll count it as one. What’s this about computer games?


A: Ah. Well, I was always a gamer. Board games in the 60s, pencil/paper role-playing games in the 70s, and then when personal PCs came into the home in the 80s--computer games. I got in on the ground floor. I steered my writing onto a different path in the late 80s and early 90s by designing and writing games. Mind you, these were story-based adventure games, so I was writing fiction out the wazoo. Writing a game is like writing three screenplays all in one. By the early 90s, my artistic job (writing) had become my real day job--I worked for a number of prestigious game companies and moved around the country with my family until 1997.


6. And by then you were writing and publishing novels?
A: Yep. In late 1995, Ian Fleming’s publishing company contacted me to see if I was interested in taking over penning the James Bond novels because John Gardner was retiring from the gig. The man in charge was Peter Janson-Smith, who was Ian Fleming’s literary agent. So I wrote my first Bond novel (and first 007 short story) while I was still working as a game designer. After it was published in 1997, I left the day job and never looked back.


7. What was it like being the Bond author for seven years?


A: It was a rollercoaster. The best part was traveling the world to research the books, and meeting a lot of cool people. The gig had its ups and downs and its own set of challenges. It’s hard enough to write good novels and get them published. Writing *Bond* novels brings a lot of baggage with the job because of the huge fan base. It’s just like Star Wars or Star Trek or Doctor Who or Batman or any of those big franchises. Luckily, most of the fans I encountered were wonderful, intelligent people. There was a small contingent, though, that wanted to kill me.


8. I’m glad that didn’t happen or I wouldn’t be interviewing you right now. So after six original Bond novels, three 007 movie novelizations, and three short stories, you moved on?

A: Yes. I wanted to do my own original thrillers. The Fleming people wanted to start a different publishing strategy, so we amicably parted ways. I continued to write “tie-ins” (I’m a founding member of the International Association of Media Tie-In Writers ) and worked on the Tom Clancy’s Splinter Cell series (as “David Michaels” for two books), the Metal Gear Solid franchise, the Gabriel Hunt pulp adventure series, and most recently with John Milius on a book based on the videogame Homefront. And I’ve written a bunch of original thrillers such as Sweetie’s Diamonds, A Hard Day’s Death, and Dark Side of the Morgue. I’ve joined the e-book bandwagon and uploaded to Amazon Kindle and Smashwords  a lot of my original works, including e-book exclusives Torment and Artifact of Evil.


9. So what’s this Black Stiletto that’s all over the Internet? 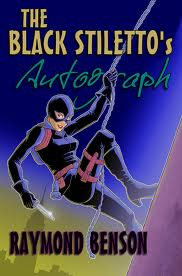 A: The Black Stiletto is my brand new thriller, the first of a series. It’s about a female vigilante operating in 1950s New York. She’s a feminist before that term was in the public vernacular. Oceanview Publishing put it out in September 2011, and I’m very excited about it. At first, my literary manager and I had a hard time trying to explain exactly what this book is... but Library Journal favorably described it as a “mashup of the work of Gloria Steinem, Ian Fleming, and Mario Puzo, all under the editorship of Stan Lee.” I think that hit the nail on the head! The second book, The Black Stiletto: Black & White, will be published in May 2012. There’s also a short story, The Black Stiletto’s Autograph, which can be downloaded for free from the official website www.theblackstiletto.net. There’s a lot to explore on the site, such as the ultra-cool promo video that I wrote and produced in Hollywood (directed and edited by the talented Brad Hansen), the smooth “Black Stiletto Song” written and performed by Will Arrington, and a bunch of other stuff.


10. And finally, I understand you’re some kind of film historian and do public speaking about movies? And you like (gasp) progressive rock?


A: Yes, I teach Film History at the College of DuPage in Glen Ellyn, Illinois. I’m also one-half of “Dann & Raymond’s Movie Club,” which features Dann Gire, the film critic of Chicago’s Daily Herald newspaper, and me. We present very popular two-hour shows on various film topics at Chicago area libraries. We’re in our fifth season, so we must be doing something right. I write film-related articles and DVD reviews for Cinema Retro magazine . And, yes, I like prog rock (you’re the one who accused me of being a dinosaur!). One of my books is a small biography of the band Jethro Tull. I even contribute articles and CD reviews to Progression magazine. Prog rock ruled in the early to mid 70s. It’s experienced a big comeback since the mid 90s. Now prog is quite fashionable again. Want to make me happy? Give me some Tull, Yes, Gentle Giant, Soft Machine, Robert Wyatt, Hatfield & the North, Caravan, Magma, Porcupine Tree, Gong, early Genesis, King Crimson, Mike Oldfield, Ozric Tentacles, and Frank Zappa any time of day or night.


Okay, Ray, that’s all the time we have today. Remind me never to come over your house when you’re playing music. But thanks for answering the questions.


You’re welcome. Thanks to Nigel for having me here. Readers can find me at www.raymondbenson.com, friend me on Facebook, and follow me on Twitter @RaymondBenson. And it’s Raymond, not Ray, damn it.
Posted by Nigel Bird at 10:14