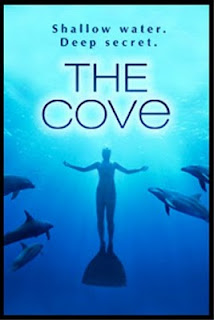 A documentary isn't always going to be everybody's cup of tea, but I think the Cove has more all-round appeal than many.

It's the story of a real life 'Ocean's Eleven', a crew of committed and charismatic characters who take us along with them on their journey to expose the mass slaughter of dolphins in the Japanese coastal town of Taiji.

On this occasion our Frank Sinatra, our George Clooney, is Ric O'Barry.

In a previous life O'Barry was the man who was largely responsible for the growth of marine mammals being used for entertainment purposes. He was the trainer of Flipper or, to be more accurate given there were a number of them, Flippers.

He explains that things went wrong when Cathy, one of the Flipper dolphins, committed suicide in his arms. She did this by keeping her blow hole closed - unlike humans, he tells us, dolphins have to choose to breathe.

From that moment he became the advocate for dolphins wherever they may need help. And boy, do the dolphins in Taiji need it.

Every year, a flotilla of fishing boats makes trips out to sea and waits for the dolphins to pass by. It traps them by creating a wall of sound in the water as they bang on large poles with hammers. Dolphins are hugely sensitive to noise and head in the opposite direction - straight into the trap of the bay.

Once trapped, people from around the world come along to select those that will look good doing someraults and bouncing on their tails for our entertainment. Each dolphin sells for $150,000 and is worth millions to a dolphinarium.

The rest are left. They're not worth so much. They could easily be releseased, but their fate is already determined.

Each year 23,000 of them will be taken to the cove of the title and killed for their meat. That's what the film is trying to expose. Funnily enough, those involved aren't keen to make things easy.

The film has something of the atmosphere of a thriller about it. We hear the risks are very serious indeed. There have been murders of activists in the past. The fisherman involved are hugely protective of the Cove where the slaughter takes place every year between September and March. No cameras are allowed near, police follow the filmmaker and O'Barry wherever he goes and interview him regularly.

He's not a wimp though, he's a seasoned campaigner. He's been arrested countless times and he's prepared to do things that most of us wouldn't even contemplate. He has courage pouring out of his saddened eye-balls.

The team he assembles involves a film crew, divers, experts in special effects work, those with military experience and those who've organised festivals.

The effects of heat-sensitive photography and of night vision cameras are visually stunning. They give it the feel of tension that you might expect from a horror movie. I' d love to see a narrative film done using the some of the things I saw here.

The shots of dolphins in the wild are also stunning. How beautiful they are when in there natural surroundings.

We look into the Whaling commission's activity, the potential of mercury poisoning in the meat, the history of dolphinaria and the roots of the protest movement.

As the crew move into action we have a strong sense of the dangers they face. It's not a comfortable watch.

In the end, we see their success. I don't mind revealing it as we know it's coming.

The sea in the cove is turned bright red. The butchers stand in boats and stab at the dolphins with spears as they flip and jump in the water until they die. It's a grim a picture as you can imagine. Pure horror and yet the sea itself has a strange beauty (or maybe that's only to a sicko like me).

As the credits rolled by I was raging. Raging at the world for letting this happen, at the fishermen, at the human race.

I want other people to watch it too. I want some of them to rage with me. I want it to stop.

Of course, I'd been manipulated a little bit by the film, but I didn't really care. I found its generally one-sided view of the world quite refreshing.

In the west we eat cows and pigs and fish and god knows what, our politicians are as corrupt as the next, we drive when we don't' need to and fill beautiful bays with oil that destroy entire eco-systems, but it doesn't mean I have to agree with the Taiji slaughter. I care about all of the things mentioned, agree that I don't do enough. I can see the point of view of the cynics and the ambivalent. I still want the dolphin killings to stop.

I want you to read this blog page, to get out the movie and watch it with friends. I want you to talk about it together and draw your own conclusions. I want you to think. Thinking's good. Thinking makes things better and worse, but it engages us with bigger things than ourselves. It'll make you think about oil, food, entertainment and consideration of others. That has to be a good thing.