On Sunday morning, I had a rush of blood and 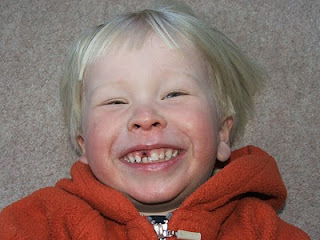 decided to take all three of my children to see Ponyo at the cinema.


Normally I take only the two girls as Don is too little to sit for long.


Matters were complicated in that he's in the middle of a potty training regime that's failing fairly miserably.


Ponyo is pretty good, loosely based upon 'the Little Mermaid' and with some startlingly good animation.


Before the film came the trailers. There was one for 'The Tooth Fairy' or similar, a movie I intend to give a wide-berth but will probably be dragged along to when it becomes one of the Sunday morning cheap seaters.


During the week, wee Don had a tooth removed at the dental hospital. It was broken mysteriously a couple of months ago and had become rotten.


In the evening, we thought about leaving the rotting stump under his pillow to do the fairy thing. He's 2, doesn't understand money, so we decided to keep the stump for nostalgia's sake.


When my eldest, dear old Nancy, lost her first tooth at the end of last year it was a different matter. We had to negotiate on the tooth fairy's behalf to keep the sum left to an affordable level.

Why the hell did we go through that process? We're fairly rational folk who may lean slightly towards the eccentric, but not so we're crazy. We believe in science and technology, yet we've done Santa Claus, the Easter Bunny, Jack Frost and, now school has arrived, we've fielded questions about Jesus and God.

It's for the same reason we read and tell stories. It feeds their imaginations, generates creative thinking, allows them to understand difficult things about the world. They can explore hopes and fears and disappointment in the safety of their own minds amidst the security of their own family.

There's also the buzz we get to see them light up when the magic's around.

The Bogey Man hasn't come into our vocabulary yet, though he has many forms in our fairytales.

How might we describe him if he had? Fierce? Ferocious? Nasty? He comes to get you when you do things your parents don't want you to do, when you go to places you've been told to avoid. He's definitely someone to stay away from.

The Tooth Fairy, now she's something different altogether. Benevolent, kind and thoughtful. If you're stoney-broke, there's no need to sell your seed or your blood, just pull out a molar and sleep on it for a little while.

Santa. He's a mystery. Powerful, magical, knows what you've done for the whole year. He's nice when he gives you stuff, but he's a moraliser. You do the wrong things and he's not coming down your chimney.

The Easter Bunny comes under the umbrella of weird and wonderful. Someone must have been chewing on the mushrooms the day they came up with him/her. I lost my own Harvey when I gave up the booze, but I have a constant feeling that he's just waiting for me somwhere and it would be just like old times if we were to bump into each other. I like the bunny, cute, cuddly and generous, but it leaves chocolate in the garden and forgets where it was put. I found a mini-egg in my wellie yesterday - a quick rub down and it tasted wonderful.

Religious figures have got it all: power, magic, love and forgiveness, as well as thunderbolts and a short fuse when things aren't going their way. They're great when they're onside, but you sure as hell don't want to be pissing them off.

Made me ponder the process of writing stories.

Think about it for for a while, whether you're writing or reading. Which character is Santa? Who's the Tooth Fairy? Where are the gods? The Easter Bunny? The Bogey man? Why the hell do you have a Jack Frost?

It might be helpful when looking for people to live in the spaces of your work to give breath to some of these guys and gals. Let them live. Throw them into a plot together and see who comes out on top. Go on. Give it a go. If you do, send me a link - I'd like to see it for myself.