One Man's Opinion: THE MAN WHO DIED TWICE by RICHARD OSMAN 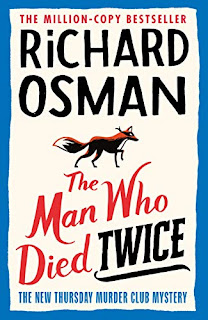 It doesn't seem like that long ago that I was reading and reviewing The Thursday Murder Club. In a nutshell, I found that to be refreshing, fun and intriguing in equal measure. I think I was also aware that the situation and the characters involved would make a follow-on difficult to pull off.

In many ways, I think The Man Who Died Twice is a pretty good sequel and does manage to create a highly-engaging tale that suits the murder club.

Appearing from the past is Elizabeth's ex-husband, a man who has already died once and, given the title, may find his number's about to come up. He has the charm of Bond as well as the smugness born of being talented and good looking. While working on a secret-service case, he's fallen foul of dangerous gangsters over in the US. Thankfully, he has a personal guard to protect him and a place to hide out (the very same home where the Thursday Murder Club wait for their live's to fizzle out, where else?).

There are dead bodies and tricks with smoke and mirrors and, for a while, there's that satisfying buzz of wondering what the hell's going on, which is accompanied by the joy of trying to puzzle it out before reality is revealed. Essentially, that makes it a winning cosy mystery; if that's your bag, this is one for the top of your list.

While meeting up with our gang again is a welcome experience, The Man Who Died Twice doesn't quite match the excellence of book one. In the main, I think that's due to the situation of the setting and having to stretch to create a new and believable situation. The observation are just that bit less sharp, the diary entries of Joyce are less powerful as a way of moving on plot, the police are less involved and more stable in a way that reduces the impact of their story-lines, and there's a tad less chemistry between the group (and so not as much character development as I might have liked).

TTMC was always going to be a tough act to follow. The second in the series has proved to be a solid and enjoyable follow-on. I'd still read a third, but do worry that a further contortion to find a suitable plot and another dilution due to familiarity may make it a step too far for me.

Richard Osman is a fine writer who brings his own twist to the genre. His humour is particularly noteworthy and his timing is excellent. Overall, I'm recommending this to anyone who enjoyed the last one and to the cosy mystery fan. It would work as a standalone, but reading in order would be much more satisfying. I worry for book three (for surely there will be one), but there will be many who will lap up each and every title with zeal in a way that may even make this a series that will be viewed as a classic when the world has warmed to the point where paper self-combusts- get it while you can.