It's 173 pages long and it catches the interest from the off, so it's a mystery to me that it took me almost four months to read this, my latest in the line of 87th Precinct novels. Truth is, it's not likely to be the book's fault at all- I put it down to losing my way and unraveling since March. It's been the kind of fragmentation that builds up without being noticed, but I guess the pieces must be coming back together just now otherwise I wouldn't have finished it at all. 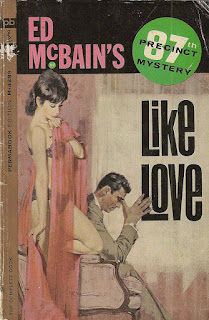 Like Love opens with a suicide and moves onto a huge explosion and the discovery of two semi-naked bodies sharing a bed. The woman is married to someone else, a bottle of whisky has been consumed and there's a suicide note to explain their final moments of life. Thing is, none of those involved in the case believe the note and there are enough clues to investigate further.

I was getting on really well with it until I reached a section where it's revealed that Bert Kling has turned sour following on from recent events, which was a pretty hard pill to swallow. After that, I lost momentum and stopped reading altogether.

When I picked it up again, the threads were still tight and the case was still fascinating. The clues were finally put together in about the most unusual circumstances I can remember and all's well that ends well.

Truth be told, it took so long I can't give it any sense of detail. I enjoyed it and there are terrific scenes which means I'll recommend it to the house. Whether my slow reading was down to the book, you might get a better idea from the guys at Hark, the 87th Precinct podcast.

And speaking of podcasts, my brother Geoff''s been at it again. His latest series involves the discussion of music by Elizabeth Alker and Stuart Maconie and it's called Notable if you fancy checking it out.

Nothing to do with podcasts, my latest, My Funny Valentine, has it's first review. It's courtesy of Ignite (a top #1000 reviewer here in the UK) and it's a real Christmas cracker: "It’s a densely-woven fabric of a story and I whizzed through it. I enjoyed it hugely." Other than a vaccine, what better shot in the arm could there possibly be than that?